Super Typhoon Hagibis strongest storm on the planet: To become the strongest of the year: Most intensification by a tropical cyclone in the western North Pacific in 25 years 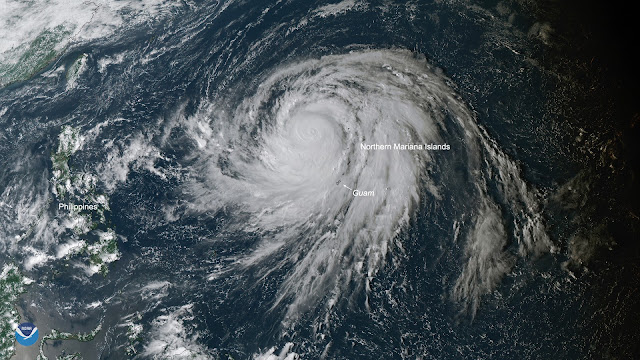 It developed from tropical storm to a monster Super Typhoon in just 18 hours and is set to become the biggest and strongest storm of this year. Hagibis is currently classed as "violent" -- the Japanese Meteorological Association, (JMA) highest classification, with gusts as strong as 270 kilometres per hour. According to Japan Today,  Super Typhoon Hagibis is heading nearer Tokyo, Japanse most densely populated area, ahead of big the Rugby World Cup weekend and could affect several crucial games.

Super Typhoon Hagibis is currently the strongest storm on the planet, with the potential to become the strongest of the year. The storm gathered strength at an incredibly fast rate, intensifying from a tropical storm to a super typhoon in a mere 18 hours, with wind speeds measured at more than 155 mph and gusts up to 195 mph according to the Joint Typhoon Warning Center (JTWC).
Philip Klotzbach, a hurricane researcher at Colorado State University, tweeted that this was the most intensification by a tropical cyclone in the western North Pacific in 18 hours since Typhoon Yates in 1996. This is also nearly three-and-a-half times the rate a storm would need to strengthen to constitute “rapid intensification,” based on the meteorological definition of that term.
The storm is currently bringing heavy rain, strong winds, and thunderstorms over the Northern Mariana Islands, while the more southerly islands of Rota and Guam are experiencing similar conditions, though slightly less severe due to distance from the eye.
The eyewall made direct contact with the small uninhabited island of Anatahan and is currently moving away from Micronesia. Hagibis is predicted to slowly weaken as it turns north but is predicted to impact Japan by this weekend as possibly a Category 1 or 2-equivalent storm.
A super typhoon is a term utilized by the JTWC to describe typhoons that reach maximum sustained 1-minute surface winds of at least 150 mph, which is equivalent to a strong category 4 or higher on the Saffir-Simpson scale in the Atlantic basin.
This true-colour image was captured by the Advanced Himawari Imager (AHI) on Japan’s Himawari-8 satellite. This satellite, the first unit of the Japan Meteorological Agency's (JMA) third-generation of geostationary satellites, provides visible light and infrared images of the Asia-Pacific region. Himawari's data are vital for global geostationary coverage, which is why NOAA and JMA have agreed to mutual back-up arrangements for their geostationary systems.