More than two million wild animals, including jaguars, pumas and llamas dead after wildfires in Bolivia which started in "MAY" and are still not extinguished. 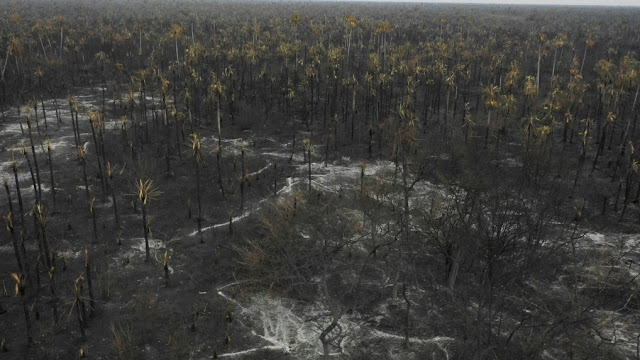 Sent in by Dr Carol Rosin.

2019 has brought to the attention of many people just how dangerous wildfires are now impacting our vulnerable planet. This year alone, uncontrollable fires have caused havoc in Syberia, the Arctic Circle, Alaska, Bolivia, Brazil, Chile, Southern Africa, Australia and Indonesia and the problem is becoming more intense as large areas of forestry and grassland around the world are suffering drought and water-stress.

The true devastation to wildlife has become evident after the weeks of wildfires destroyed a huge area of Bolivian forest and grassland.

More than two million wild animals, including jaguars, pumas and llamas, have perished in weeks of wildfires that devastated huge swaths of Bolivian forest and grassland, environmental experts said Wednesday. The fires devastated the Chiquitania tropical savanna in the east of the country. "We have consulted the biologists of Chiquitania and we have exceeded the estimate of more than 2.3 million missing animals in many protected areas," Professor Sandra Quiroga of Santa Cruz University told AFP.

Latin American ocelots, and other wild cats like pumas and jaguars, as well as deer, llamas -- and smaller forest animals like anteaters, badgers, lizards, tapirs and rodents --,  were victims of the fires, according to biologists investigating the scale of the damage. "The forest is totally charred and the damage is irreversible. It will never get back to normal," said Sandra Quiroga of Santa Cruz University Local media showed images of charred animal carcasses in the smouldering forests and birds fleeing to zones spared by the flames.

The fires, which have devastated more than four million hectares (10 million acres) since August, has completely destroyed the "primary forest" extending over 100 hectares in the Tucavaca reserve in the eastern Santa Cruz department. "The forest is totally charred and the damage is irreversible. It will never get back to normal," said Quiroga. The eastern department of Santa Cruz has been the hardest hit of Bolivia's nine departments since the fires began in May and intensified in late August.

Bolivia in August enlisted special firefighting planes, a Supertanker Boeing 747 and a Russian Ilyushin, as well as helicopters, 5,000 firefighters, soldiers and police but the fires have still not been extinguished. AFP / Aizar RALDES The remains of a fox killed in forest fires in the Otuquis National Park in eastern Bolivia Environmentalists blame laws enacted under leftist President Evo Morales, who has encouraged burning of forest and pasture land to expand agricultural production. The government attributes the blazes to dry weather and flame-fanning winds.