A “historic winter storm," bringing heavy snow and record cold to parts of western US! Frosty mornings and temperatures well below average in Europe next week 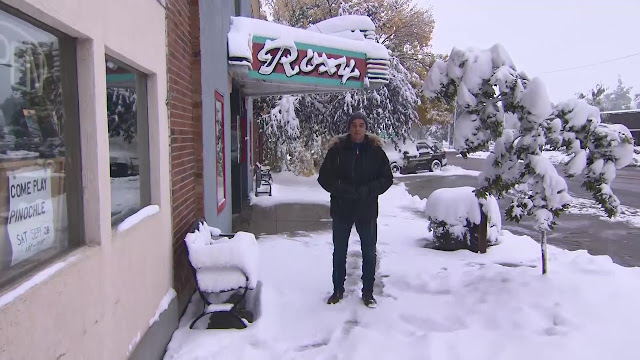 After a historic wet year in parts of the US, early winter is in place in other parts. The northern Rockies were blasted with the first big snowstorm of the season, which the National Weather Service forecasted as a “historic winter storm." Winter storm warnings and winter weather advisories were still in effect for parts of the northern Rockies, Cascades, and the Sierra Nevada early on Sunday morning as snow continued to fall. Highways across northwestern Montana experienced reduced visibility due to blowing and drifting snow over the weekend reports Accu Weather.

A preliminary snowfall of 9.7 inches fell in Great Falls, Montana, on Saturday, which beat the daily record of 6.1 inches set in 1954. This also is the earliest date of a snowfall of 9.7 inches or greater, with the previous earliest date being November 8, 2012. Snow will continue to pile up in the city into Sunday night. Missoula, Montana, recorded a trace of snow on Saturday, which is the first time a trace of snow has ever been recorded on the date.

By Saturday afternoon local time, snowfall in Browning, Montana, nearly reached 2 feet, measuring 23 inches of total snowfall at 4:10 p.m. MDT. A total of 15 inches of snow was reported near Kiowa, Montana, while another report found that East Glacier Park, Montana, had received 21 inches of snow.

According to Severe Weather Europe, a cold polar maritime airmass to push across large parts of Europe next week. both GFS and ECMWF are in good agreement on the cold push. It starts in the wake of a broad low that will push across the Baltic region early on Monday, establishing a broad meridional flow from the north into central Europe. The cold airmass will push across NW Europe, including parts of Scandinavia, the British Isles and Ireland by late on Monday, pushing further into central Europe by Thursday and into eastern and southeastern Europe late in the week.