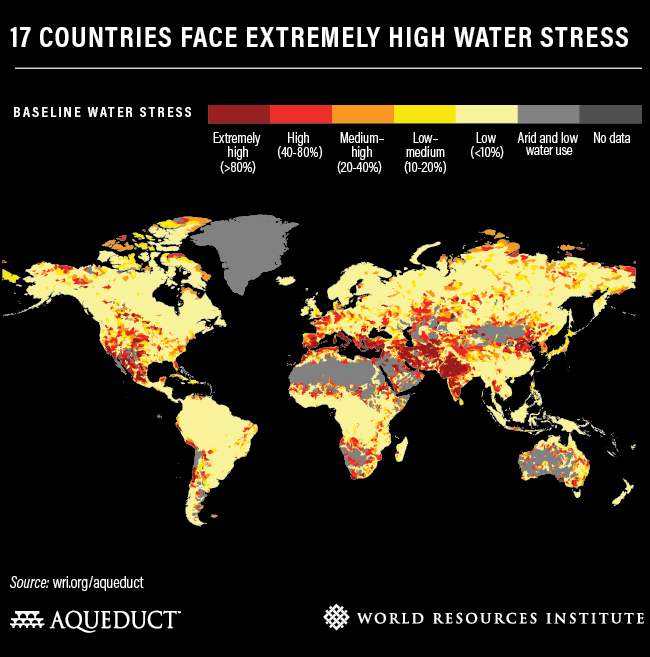 As increasing pressure on the planet rises with the threat from climate change, the collapse of our living species, dying oceans, dying agriculture and a constant threat of WWIII hanging over our heads, it should not come as any surprise to learn that 17 countries – home to one-quarter of the world’s population—face “extremely high” levels of baseline water stress.

In a new report by the World Resources Institute, one-quarter of the world’s population almost two billion people—face “extremely high” levels of baseline water stress, where irrigated agriculture, industries and municipalities withdraw more than 80% of their available supply on average every year.
Forty-four countries, home to one-third of the world, face “high” levels of stress, where on average more than 40% of available supply is withdrawn every year. (Check your country’s water stress level in the full rankings at the end of this post.) Such a narrow gap between supply and demand leaves countries vulnerable to fluctuations like droughts or increased water withdrawals, which is why we’re seeing more and more communities facing their own “Day Zeros” and other crises.

Once-unthinkable water crises are becoming commonplace. The Big Wobble has for years been covering the loss of water in the reservoirs in Chennai, India’s sixth-largest city, are almost dry right now. Last year, residents of Cape Town, South Africa narrowly avoided their own “Day Zero” water shut-off. And the year before that, Rome rationed water to conserve scarce resources. The reasons for these crises go far deeper than drought: Through new hydrological models, WRI found that water withdrawals globally have more than doubled since the 1960s due to growing demand – and they show no signs of slowing down.

Twelve out of the 17 most water-stressed countries are in the Middle East and North Africa (MENA). The region is hot and dry, so water supply is low to begin with, but growing demands have pushed countries further into extreme stress. Climate change is set to complicate matters further: The World Bank found that this region has the greatest expected economic losses from climate-related water scarcity, estimated at 6-14% of GDP by 2050.