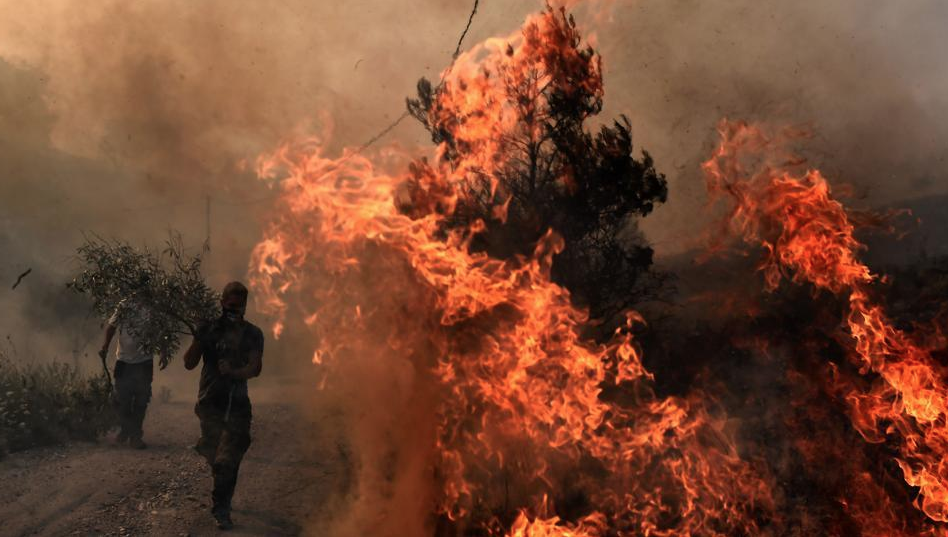 More than a thousand firefighters battled wildfires Tuesday in Greece, with the largest burning out of control through a nature reserve on the island of Evia north of Athens causing four villages and a monastery to be evacuated. The country's civil protection authority declared a state of emergency in the area of Evia affected by the fire, where about 280 firefighters, volunteers, soldiers, six water-dropping planes and six helicopters were deployed, along with one more helicopter coordinating the air support. Greece called on the European civil protection organization for assistance, and four firefighting planes were being sent from Croatia and Italy, said Prime Minister Kyriakos Mitsotakis, who cut short his summer vacation and returned to the Greek capital to visit the fire department's main coordination centre.

"The conditions today are exceptionally difficult," Mitsotakis said. He thanked firefighters for their efforts and said the government's main concern was protecting human life. Strong winds fanned the fire in the thickly forested Evia reserve, as well as several more wildfires burning Tuesday in Greece.

A total of 56 forest fires broke out around the country in a 24-hour period spanning Monday night and Tuesday. More than 1,000 firefighters in all were assigned to the blazes. A volunteer firefighter reportedly burned on the island was transported to a hospital in Athens. "The most important thing is to not have any human casualties," Interior Minister Takis Theodorikakos said in a telephone interview aired on state television.

Smoke from the Evia fire blanketed Athens in the morning. Authorities warned people in affected areas, particularly the elderly, young children and those suffering from breathing or heart conditions, to remain indoors and set air conditioning units to recycle indoor air. The blaze broke out shortly after 3 a.m. local time, the civil protection authority said, and strong winds helped spread it through the dense pine forest. More than 300 people from four villages were gradually evacuated during the day, many riding on buses and others going out in their own vehicles.

"The fire trapped us at Makrimalli, and we had to leave quickly," said Nikos Petrou, referring to one of the villages that were ordered evacuated. "As I was leaving, the fire was coming behind us. " A separate blaze broke out on the north part of Evia, and 15 firefighters, a helicopter and a small plane worked to keep it from spreading.

Dozens of more firefighters, two planes and a helicopter tackled a separate forest fire on the northern island of Thassos. Another wildfire was burning through brush and dried weeds near Thebes, northwest of Athens. More than 30 firefighters tackled yet another in southern Greece; the fire department said it was brought under partial control after about an hour. On Tuesday afternoon, an additional blaze broke out in southern Greece.

Forest fires are common in Greece during the hot, dry summer months. Authorities have repeatedly warned the public not to engage in outdoor activities that could cause fires, such as welding work, burning dried weeds or lighting campfires and barbecues. Parks and forest areas are closed to the public at times of high fire risk. Last year, more than 100 people died when a fast-moving forest fire broke out in a seaside area northeast of Athens and raged through a nearby settlement of mainly holiday homes. The fire trapped people in their cars as they attempted to flee, while many other victims drowned as they tried to swim away from beaches overcome by heat and choking smoke.