Russia has declared a state of emergency in two regions of Siberia as wildfires engulf an area the size of Belgium. 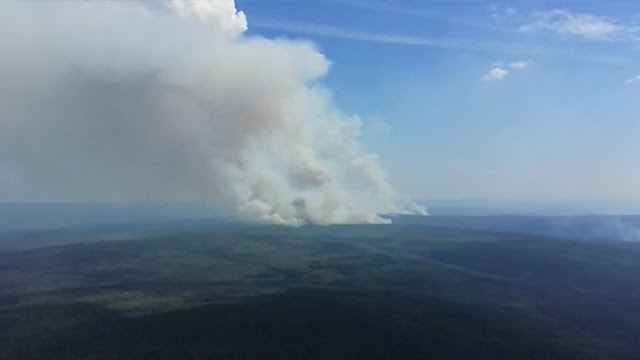 Russia has declared a state of emergency in two regions of Siberia as wildfires rage across 12,000 square miles of countryside.
Terrified residents in the Krasnoyarsk and Irkutsk regions called on the state to act as flames engulfed an area the size of Belgium.
There are few inhabited zones in the path of the inferno but smoke has blanketed major cities in Siberia and the Far East, making it hard to breathe and posing health risks for the population.
Over 720,000 people have signed a petition on Change.Org calling for a state of emergency to be declared across the whole of Siberia in order to draw more forces and state funding to battle the wildfires that have erupted in the past month.
Residents of the affected areas have been posting photos of burning forests and smog-covered cities and villages.
Local authorities have however cited a 2015 decree by the Ministry of Natural Resources that allows them not to extinguish wildfires if they do not pose a direct threat to settlements.
Fire-fighting can also be avoided if the cost of the operation is higher than the estimated damage.
The governor of Krasnoyarsk, Alexander Uss, defended the government's reluctance to put out the fires by comparing them to winter blizzards.
He said that it can be "pointless and sometimes even harmful" to try and extinguish flames in unpopulated areas.
More than 11 million hectares have already been affected by wildfires this season, Greenpeace Russia said in a statement on Friday, adding that blazes continue to spread around hundreds of thousands of hectares every day.
The environmental group warned that it was no longer a regional problem and more measures should be taken.
It is not immediately clear if a state of emergency in some of the affected areas will help contain the wildfires.
European scientists earlier raised concerns over unprecedented fires that started sooner than usual in the Arctic this summer season releasing huge amounts of greenhouse gases into the atmosphere.
The fires have been caused by record high temperatures combined with lightning and strong winds.