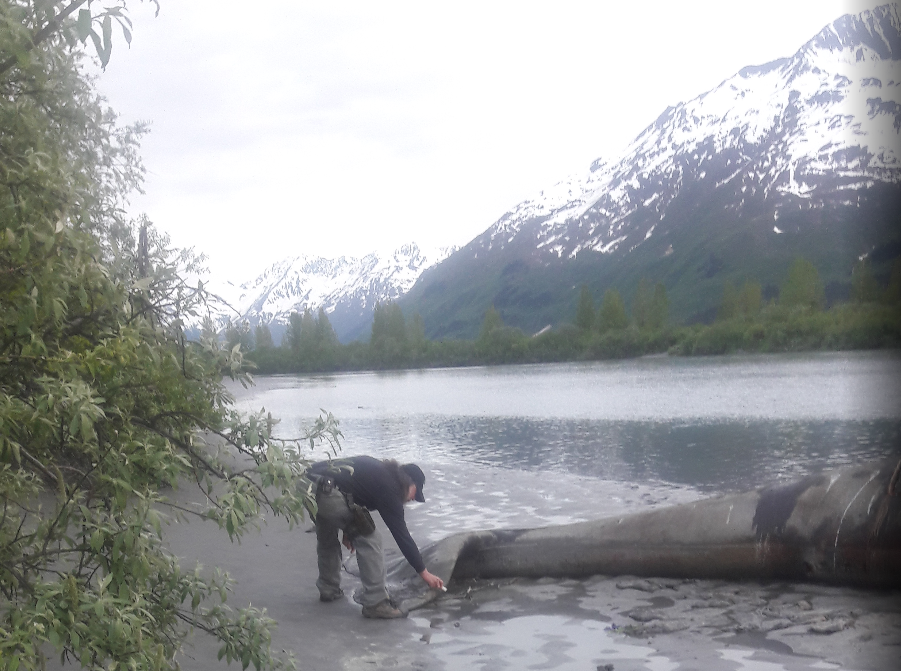 
Scientists this month claimed they were baffled as dead whales continue to wash ashore in parts of Alaska.
More than a 100 have washed up with many more thought to have died out at sea.
The whale die-off has been designated as an “unusual mortality event,” a classification that authorizes a special investigation.
However, as usual, we are only been fed scraps of a situation which has reached disastrous proportions.
Today, Reuters reported at least 60 dead seals (many many more will have died out at sea), have been discovered along beaches of the Bering Sea and the Chukchi Sea in northwestern Alaska, and scientists are trying to determine what caused their deaths, the National Oceanic and Atmospheric Administration (NOAA) said on Wednesday.
The dead seals – bearded, spotted and ringed seals – have been found at sites ranging from the southern edge of the Bering Strait region to the Chukchi coastline above the Arctic Circle, NOAA’s Fisheries said.
NOAA goes on to blame the lack of ice as the reason why the seals are dying, (but gray whales don't die from the lack of ice do they!) Reuters story here

Earlier this year, CNN reported, "Climate change is killing tufted puffins, researchers say."
Tufted puffins, those adorable black and white birds with big orange beaks, experienced an unusual die-off in the Bering Sea in late 2016 through early 2017.
Massive mortality events like this seem to be increasing, (they surely do) likely because of climate change, according to a new study.

Further south, a shark die-off in San Francisco Bay is being blamed on a parasite in the water.
Bay currents are pushing the carcasses ashore at Crown Beach.
So far this year, more than a 100 leopard sharks have washed up onto beaches around the area, (that figure is a tiny representation of the true number, emancipated bodies sink out at sea and since 2017, thousands of leopard sharks have washed up dead!)
The deaths are blamed on a protozoan parasite that gets into the shark's brain, James C. Frank, Supervising Naturalist for the East Bay Regional Park District told KTVU. (Nothing to do with lack of ice then?)

Scientists estimate that hundreds of thousands of dead seabirds are washing up along the coasts of western Alaska for the last three years. (remember, this is a small percentage of the true number, many many more will have died out at sea!)
Common murres, an abundant North Pacific seabird, have been found dead on shores from Shishmaref to St. Lawrence Island.
It is thought millions of the little birds have died since 2015 but the true number will never be known because the majority of birds are thought to die out at sea.
A new report now claims that the dying seabirds are now turning up as far south as San Francisco...
More than 2,500 starving and injured seabirds have been rescued in Northern California just since the beginning of this year.
It's a mystery why there are suddenly so many of them.
Some are being treated here in the Bay Area.
The birds are common murres; many are orphaned chicks, found abandoned on beaches from Monterey to Mendocino.
All the little dead birds were emancipated, they had starved to death.

This week, The Big Wobble received an update from Bill up in Alaska that radiation levels measured in a dead gray whale he discovered were higher than many of the salmon and halibut levels he had tested over the last few years.
Bill claimed he could positively state that the gray whale was radioactive and although he did not know if that was the cause of its death, he was highly suspicious it was a factor.
Bill told me he did not believe this was the only whale that has recently died that was radioactive.
"As of today, I have not been able to find one salmon or halibut that was not radioactive," he said.
Why is radiation never mentioned by the experts, the silence is deafening, they say they (the experts), test all dead species, you would expect they would at least be claiming, "hey, but we didn't find any radiation!" But they don't, they never mention the R-word, never, which is a little strange don't you think especially after other warnings have been published.

In 2017, A study by the University of Hawaiʻi at Mānoa revealed almost 50% of fish consumed on the islands of Hawai’i were contaminated with caesium 134 the radioactive finger-print of Fukushima.
The report also showed that migrating organisms can transport the Fukushima-signature (caesium 134) over significant distances as they showed detectable 134Cs (6.3±1.5 Bq/kg) in Pacific bluefin tuna caught off the California coast only a year after the incident.
Another study found caesium 134 in longfin tuna (Albacore) along the western coast of the US just one year after the Fukushima disaster.
The recent findings as you might expect are being played down and the usual sound-bites are telling us "it's nothing to worry about," something the powers that be have been saying for 8 years now.
The latest study by Alaska Sea Grant agent, Gay Sheffield claimed, a slightly elevated level of radioactive contamination connected to the Fukushima nuclear disaster has been detected in the northern Bering Sea.
The level of caesium-137, a radioactive isotope, is extremely low and not considered a health concern, according to state epidemiologists.
The sampling, conducted by residents of Saint Lawrence Island, documents the Fukushima plume’s northern edge arriving in the Bering Sea for the first time and shows levels of caesium-137 higher than they were before the 2011 nuclear power plant accident in Japan.