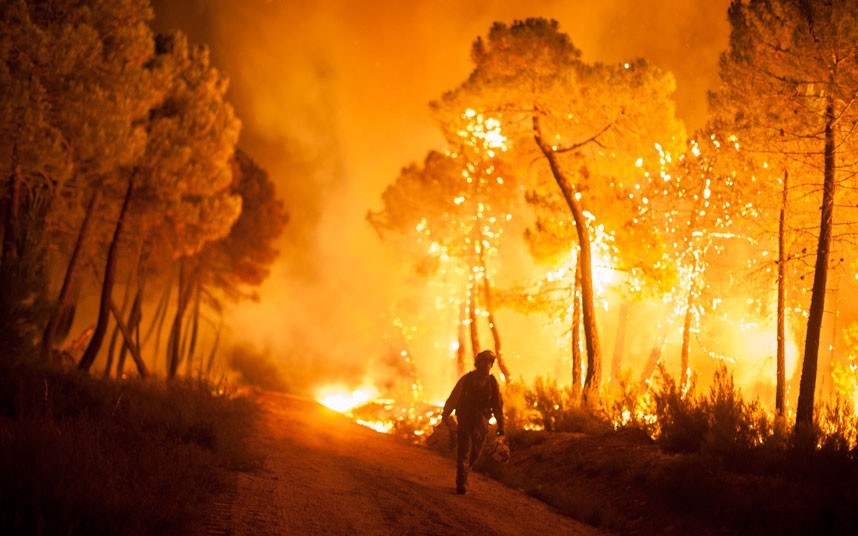 A huge forest fire has broken out in Spain as a deadly heatwave affecting much of Europe continues to intensify.
Temperatures across the continent are expected to continue to soar further still on Thursday, the result of an "enormous" reservoir of warm air drawn from northern Africa, dubbed a Saharan Bubble. Germany, Poland, and the Czech Republic have already recorded their highest ever June temperatures this week, while France, Switzerland, and Belgium could now follow.
It comes as hundreds of firefighters and soldiers battled a dramatic forest fire in north-east Spain which raged into Wednesday night.
Temperatures are expected to reach 45C in parts of northeastern Spain on Friday as officials warned more "significant" forest fires could break out.
Families in the area were evacuated and roads were closed, while Catalonia's regional interior minister Miquel Buch described the blaze as the most serious the region has seen in 20 years.
He said on Twitter that there were fears it could destroy 20,000 hectares before it was put out.
"Let us be very aware that any irresponsibility can end up being a catastrophe.
Maximum precaution," he said.
European forecasters warned that "hell is coming" ahead of this week's record-breaking heat wave. The 2,000-mile wide reservoir of warm air has sparked health warnings, closed schools and forced speed restrictions on Germany's autobahns.
On Wednesday, Coschen in Brandenburg peaked at 38.6C - a new German record for June. Meanwhile, three swimmers died in separate incidents on beaches in southern France as the mercury soared to over 40C.
A man, aged 70 suffered a cardiac arrest in calm water and was believed to have been a victim of 'thermic shock' after coming into contact with the water.
Two other people died in similar circumstances.
A woman, 62, died at a beach near Montpellier, and a man, aged 75 also died at another beach nearby.
The French weather agency set the heat warning level at orange - the second highest intensity on its four-level categorization system for potentially dangerous conditions requiring public vigilance. Radzyn in Poland and Doksany in the Czech Republic also recorded new national highs, with temperatures hitting 38.2C and 38.9C respectively.
Parts of France and Switzerland also recorded their local all-time highest temperatures ever.
Even in the high-altitude Alps, temperatures topped 30C in places.
In Britain, temperatures are expected to climb as high as 31C over the weekend.