A warning of what's to come? Summertime kicks off in the Northern Hemisphere with Southeast US, Japan India and Pakistan all breaking heat-related-records 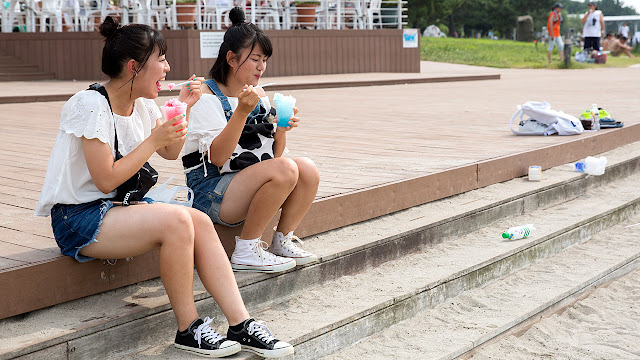 All-time high-temperature records were broken on Sunday in Japan as temperatures soared over 38 C (100 F).
Summerlike temperatures took over Japan on Sunday with temperatures rising to 39.5 C (103 F) on the island of Hokkaido, according to the Japanese Meteorological Agency.
This was the first time the temperature has ever risen past 38 C (100.4 F) in Hokkaido.
This high temperature also broke the record for the hottest temperature during the month of May in all of Japan.
The previous record high temperature in Hokkaido was 37.8 (100 F) set in Otofuke on June 3, 2014. The Tokyo Fire Department says 107 people were taken to hospitals in the Japanese capital over the weekend due to heatstroke. Fire Department officials say the number of heatstroke patients treated in hospitals in Tokyo has reached 237 so far in May.
The figure for the same period last year was 142.


An intense heatwave across south Asia has killed dozens of people with sustained temperatures in excess of 40C (104F) coinciding with power cuts and Ramadan when many Muslims avoid eating or drinking water.
At least 65 people have died in Karachi in recent days according to the charitable organization that runs the central morgue in the Pakistani port city, as volunteers handed out water to labourers and others working outside in temperatures as high as 44C.
Local media reports claimed the death toll could have exceeded 100 in the sprawling megacity of 15 million, where high temperatures are exacerbated by an absence of green space, estimated to make up just 7% of the urban area.
The Edhi Foundation, which runs Karachi's central morgue, said most of the dead in the city were working-class people from poorer neighbourhoods, including children and elderly people. A heatwave in 2015 left morgues and hospitals overwhelmed and killed at least 1,200 mostly elderly, sick, and homeless people.
In 2015, the Edhi morgue ran out of freezer space after about 650 bodies were brought in the space of a few days. Ambulances left decaying corpses outside in the sweltering heat.

Extreme temperatures were also recorded in neighbouring India, with parts of Maharashtra state reaching 47C on Monday.
More than 22,000 people died in heatwaves in India between 1992 and 2005, according to government data released last year.
Authorities say that figure has fallen dramatically since as a result of public health campaigns, including training medical staff to diagnose heat-related illnesses and sending colour-coded temperature warnings through the media and WhatsApp.
Last year, about 222 Indians died because of the heat, the government says, down from 1,111 in 2016 and 2,040 the year before.
Temperatures in Karachi are expected to stay above 40C until 24 May, according to weather forecasters.

Memorial Day marks the unofficial start to summer and sweltering heat will have a firm grip on the Southeast of the US beyond the extended holiday weekend.
Dozens of record highs have fallen amid the heat wave since it began late last week.
According to Accuweather,  Friday, Augusta, Georgia, tied a 141-year-old record high as the temperature soared to 98 degrees Fahrenheit.
Saturday's high of 100 F at Savannah, Georgia, tied the record for the earliest occurrence of triple-digit heat in the city. On Sunday, the city set an all-time record high for May as the mercury soared to 102.
Charleston, South Carolina, and Wilmington, North Carolina, reached 100 for the first time ever in May on Sunday.
The heat wave will continue to enter record books in many communities through much of this week. Temperatures will soar into the middle and upper 90s once again on Memorial Day in Montgomery, Alabama; Atlanta; and Tallahassee and Tampa, Florida.
May 25 The record high of 95 that Atlanta can tie on Memorial Day was set in 1916.
Highs near or above the century mark will continue to bake Columbia, South Carolina; Augusta and Savannah, Georgia; and Jacksonville, Florida.