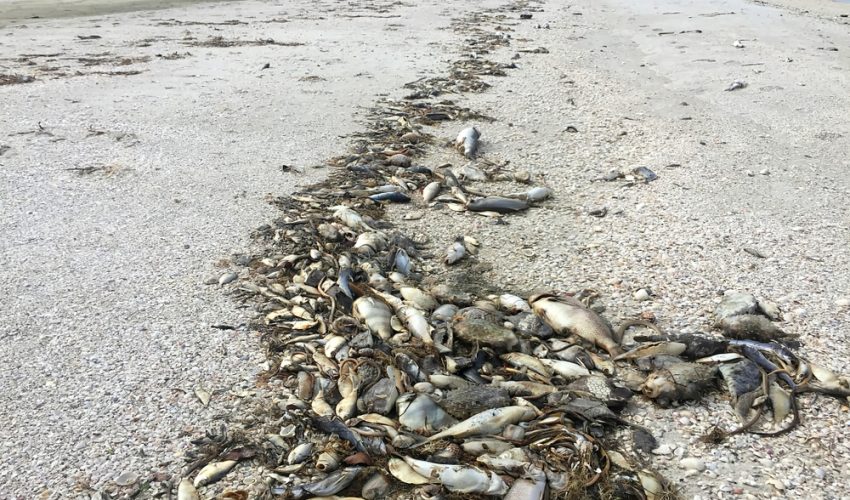 It was the unprecedented horror of 2018 for Florida's beaches when thousands of tons of marine life died due to toxic algae and it has been found again and could strike once more this summer.
Scientists have confirmed that the build-up in canals behind several Fort Myers homes along the Caloosahatchee River is algae.
They have also confirmed that it's toxic.
Our team collected a sample and took it to FGCU scientist Michael Parsons, who said it's toxic.
It's the same type of algae that was of concern last year, but we cannot be sure we will have the same algae bloom as 2018.
Parsons said the FDEP is monitoring it and testing certain areas of the waters if they see it building up.
Parsons recommends that all people and animals stay away from water that has a bad odour and has green particles in it.

"This was Florida's Deep Water Horizon!" An incredible 408 marine life die-off's, almost one every day from July 2016 to November 2018 and is the biggest marine disaster in Florida's history and today the Coastal Conservation Association Florida and the Florida Fish and Wildlife Conservation Commission have come up with an official number of deaths during that period, they are claiming the red tide killed 267 tons of marine life along the Southwest coast of Florida. Full story
On December the 6th 2018, Fox13 claimed red tide blamed for the massive fish kill at Robinson Preserve Full story here
On 30th of October, 2018 AJC reported 10 tons of dead fish removed from Brevard County beaches Florida. Full story
On the same day in Pinellas County, tons of dead fish, killed by red tide, continue to wash inshore in Pinellas County. Full story
USA Today reported on 16th of Oct, 2018 of the red tide fish kill littering Indian River Shores beaches with 60,000 dead fish, police say. Full story
15th of October 2018, CBS Miami reported 14 tons of dead fish removed from Naples Bay Full story
Sept 2018, WJHG reported red tide causes thousands of fish to wash up in Panama City Beach. Full story
Bradenton Herald, 27th of August reported the county had already collected about 241 tons of red tide-related debris left on Manatee County beaches, parks and waterways, cleaning up the majority of fish kills, officials announced during a news conference. Full story
On the 16th of August 2018, WinkNews.com reported 309 tons of dead fish were cleared from Sanibel beaches. Full story here
On the same day, Fox4 reported Over 3 million pounds (1360 tons) of dead fish cleaned up from Lee County waters, Full story here
On the 6th of August Fox13 reported, tons of dead fish cleared from beaches on Anne Marie Island. Full story here
The end of July, Miami Herald reported dead fish, birds, manatees, even a whale shark. As the toll from worst red tide in decade grows. Report here
in April 2018, Spectrum News 13show a video of thousands of fish coming up dead in the Indian River Lagoon again. Brevard County officials think the warmer weather and algae blooms are to blame Full story
Nov 2017, Fox news, reports, red tide causing thousands of dead fish to wash up on Sanibel Full story
Sept 2017, CBS reports,  South Florida Water Management District crew arrived early Wednesday to start cleaning up thousands of dead fish, full story
Aug 2017, News Channel 8 reported, thousands of dead fish causing foul smell near Safety Harbor, Clearwater. Full story
This is only part of the story, there have been many many more fish die off's around the shores of Florida which I have not added because they are smaller and I would be here forever if I did.
Animal-Die-Offs