"It is jaw-dropping," The drinking water in Paradise where the worst wildfire in California's history happened is contaminated with the cancer-causing benzene 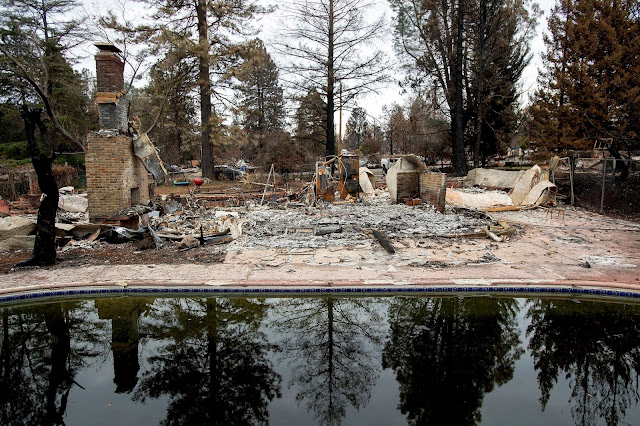 The drinking water in Paradise, where 85 people died in the worst wildfire in state history, is contaminated with the cancer-causing chemical benzene, water officials said.
Officials said they believe the contamination happened after the November firestorm created a "toxic cocktail" of gases in burning homes that got sucked into the water pipes as residents and firefighters drew water heavily, causing a vacuum in the system that sucked in the toxic fumes, the Sacramento Bee reported.
Officials say that may explain why benzene, which has been linked to anaemia and leukaemia, has been found in tests at various spots rather than from one source in Paradise, where 90 per cent of the buildings were decimated by the blaze.
Paradise Irrigation District officials say they have taken about 500 water samples around town, and they have found benzene 30 per cent of the time.
"It is jaw-dropping," said Dan Newton of the state Water Resources Control Board. "This is such a huge scale.
None of us was prepared for this."
Those who have assessed the problem say the water district may be able to clean pipes to some homes later this year, but it will take two years and up to $300 million before all hillside residents can safely drink, cook or bathe in the water from their taps.
About 1,500 of the town's 27,000 residents are living in the few surviving houses.
Water officials have warned them not to drink, cook, bathe in or brush their teeth with tap water and to only take quick showers with warm water.
Those residents are living on bottled water deliver daily and water tank deliveries.
Norman Stein, 84, is one of the residents back in Paradise.
He drives 15 minutes each week to the water distribution centre and loads the trunk with bottles and stacks them in his garage.
He and his wife disagree on the risk posed by their tap water.
She opened the sink tap to show visitors how clear the water is.
"I could feel an oily substance before.
But it's cleared up now," she said.
"This is good water."
"Only it's got benzene in it," her husband retorted.
"I won't even brush my teeth in that stuff."
Stein is thinking about buying a purifying system.
Some of his friends have done so.
But water officials have said that they do not know how well in-home filters protect residents if there is benzene in their taps.
Water experts said what happened in Paradise has been detected only once before - during the Tubbs Fire in Santa Rosa last year.
They say California not only must take the right steps to assure water safety in Paradise, but it also must take the opportunity to learn lessons that could protect drinking water in future wildfires.
One of those is Jackson Webster, a Chico State University professor and environmental engineer specializing in the effects of wildfire on water quality.
"This is really just the beginning here," Webster said.
"The fires in Santa Rosa caught people by surprise. Now, it has happened twice. The bells are ringing."