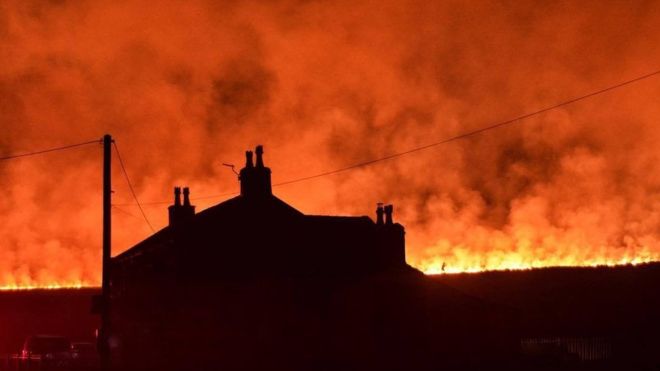 Photo credit PA.
The UK has broken the record for its warmest winter day for the second consecutive day, with a temperature of 21.2°C in Kew Gardens, London.
According to the BBC Monday was the first time temperatures of over 20C had been reported in winter.
The unusually high temperatures have prompted hedgehogs to come out of hibernation, butterflies to emerge and migrating birds such as swallows and house martins to arrive more than a month early.
The RSPB said birds, insects and other wildlife could face "a real crisis" if the weather turns colder, as forecasts predict.
Meanwhile, fire crews have extinguished a huge blaze on moorland in West Yorkshire.
The fire, described by one witness as "apocalyptic", covered about 1.5 sq km of land near Marsden.
West Yorkshire Fire and Rescue said it was "one of the biggest moorland fires we've ever had to deal with".
Here in Holland record, February temperature records have also tumbled as ass the mercury crept above 20 deg C in parts this week.
Los Angeles is officially experiencing the coldest February in nearly 60 years, according to the National Weather Service, as the city has endured a series of storms and is bracing for more, later this week.
If the forecasts for the first week of March are verified, one of the coldest weeks of the winter season is on its way.
At the peak, it will feel more like midwinter than early spring for much of the Lower 48.
"The most unusually cold air in the Northern Hemisphere is set to nose-dive into the U.S. to start March," tweeted Ben Noll, an atmospheric scientist based overseas.
Another atmospheric river event is pummeling California with feet of snow, in the Sierra Nevada Mountains, shattering February snow records at some ski resorts while also triggering flooding, rockslides and mudslides in lower elevations.