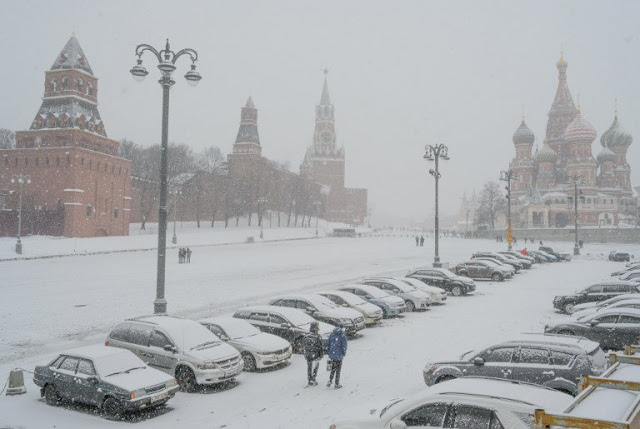 2019 is only 45 days old but we have had record heat, record cold, record rainfall and record snowfall all over the planet and weather records are being broken on an almost daily basis.
The newest area to suffer a record-breaking weather event is Moscow, the capital of Russia.
According to France 24, seven centimetres (2.8 inches) of snow fell overnight, according to the national meteorological service, with drifts reaching up to 45 centimetres (18 inches).
The Moscow meteorological service said the snowfall beat a record set in 1995 and amounted to almost a third of the average monthly figure, according to news agencies.
City authorities said they sent out more than 60,000 people to shovel the snow.
Some 10,000 snow ploughs and 2,000 trucks were dispatched, they added.
The heavy snowfall hit the whole of central Russia but ended in Moscow by nightfall.

Meanwhile, in the US, the California city of Redding, which averages about 3 inches of snow per year, received upwards of a foot of new snow from Nadia, effectively shutting down the city of nearly 100,000.
Roads were impassable and much of the city's homes and businesses lost power as inches of heavy snow weighed down power lines.
"We've been here since 2002 and we've had snow maybe four times, but nothing like this," local resident Chris Belcastro told SF Gate.

According to the Weather Channel, the heavy snow caused numerous power outages; up and down the West Coast, more than 100,000 homes and businesses were in the dark because of Storm Nadia, according to PowerOutage.us.