A glimpse of our future? Heatwaves in the southern hemisphere is killing wildlife ‘on a biblical scale’ from record-breaking heat 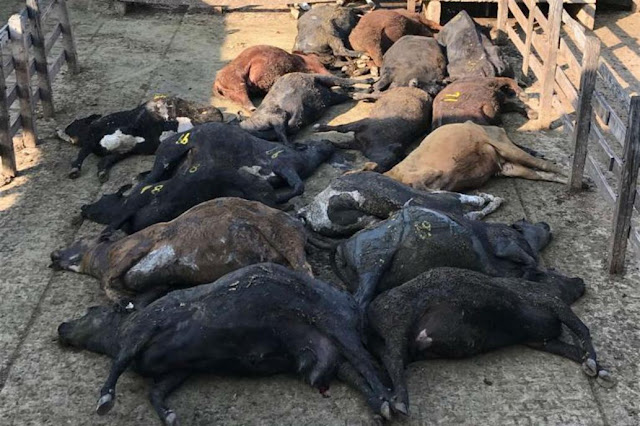 We are just 38 days into 2019 and already we have had record heat in Australia, Chile, Argentina and Brazil,  NASA claims the last 5 years have been the warmest since modern records began
Heatwaves in the southern hemisphere taking its toll on wildlife dramatically in 2019 already

The number of dead cattle on a remote Western Australia property is expected to double to 2,000, a peak industry group warned today, as evidence surfaced of an earlier incident at the same site. Full story

Locals around the Darling River were confronted with a sea of white, as hundreds of thousands of dead fish carpeted the waters near the southeastern Outback town of Menindee. Just weeks after up to a million were killed—with scientists pointing to low water and oxygen levels as well as possibly toxic algae another mass death occurred in the key agricultural region. Full story

Thousands of birds have been found dead at one of Western Australia's most important inland wetlands. Birds roosting at Lake Gregory after a wet season. A Department of Primary Industry and Regional Development veterinarian arrived at Lake Gregory in the East Kimberley earlier this month to take a sample and found a number of wild birds in "poor conditions with low body weights". Full story

Bats dying ‘on a biblical scale’ due to record-breaking Australia heatwave as mass flying fox deaths, the ‘canary in the coal mine for climate change’Full story

An extreme heatwave in Australia has led to the deaths of more nearly 100 wild horses in the outback, authorities say. Rangers found dead and dying animals in a dried-up waterhole near Alice Springs, in the Northern Territory. Full story

The intense heat in Uruguay that affected the country in recent days did not affect only human beings, who persistently complained about the thermal sensations through social networks.
The poultry sector, in particular, suffered the heat stroke in its economy since 100,000 chickens killed by high temperatures are estimated (mainly in Montevideo and Canelones). Full story

Hundreds of cattle lost as temperatures hit 45 deg C, (110 deg F) where more than 150 animals died the day before yesterday and joined hundreds more that were lost in feedlots and transport trucks in Argentina, translated from Spanish. Full story

High temperatures, the humidity and the suspicion of toxins in the food as a predisposing factor caused the death of a thousand cattle in at least four Santa Fe feedlots, Argentina at the beginning of  2019. Full story