2019: And the records keep tumbling Parts of California breaks a 100-year record with 6ft, (almost 2 metres) of snow in just 24 hours 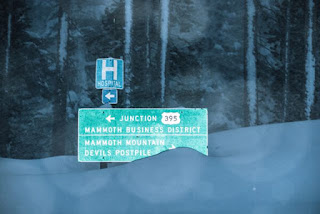 Photo TransendingSnowBoarding
And the records keep tumbling, yesterday reports came from Queensland that 1 year's rain fell in just 7 days after a month of a record-breaking heatwave.
Today the Weather Channel has reported 6ft, (almost 2 metres) of snow has fallen in just 24 hours in parts of California breaking a 100-year record.
The incredible amounts of snow have fallen throughout parts of the Mountain West since last Friday after a one-two punch from winter storms Kai and Lucian.
The Sierra Nevada, straddling the border between California and Nevada, has been particularly hard-hit, where one ski resort tallied 6 feet of snow in just one day.
Taking that crown is June Mountain, east of Yosemite National Park. June Mountain reported 72 inches of new snow in the 24 hours ending 9 a.m. PST Sunday morning.
The storm-total snowfall at June Mountain from Friday through mid-morning Sunday was measured at 96 inches, according to the National Weather Service in Reno, Nevada.
Yes, that's 8 feet (2.5 metres) of snow in less than three days.
And it was too much for the ski resort to handle; June Mountain was closed on Monday as workers attempted to dig out, the resort.