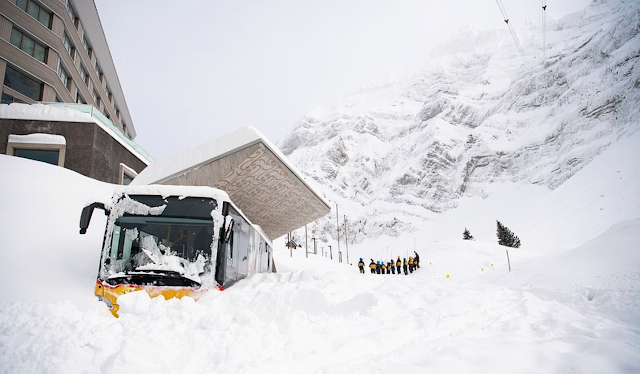 
Heavy snowfalls brought chaos to parts of Germany, Norway and Sweden on Friday, leaving roads blocked, trains halted and schools shut.
The front of a Swiss hotel was destroyed by a 300m wide avalanche.
A 1,000ft wall of snow thundered into Hotel Säntis in Schwägalp in northeastern Switzerland, with at least one person needing to be dug out of the snow.
Dozens have been evacuated from the 4,265ft altitude skiing resort and pictures show a bus buried in snow near what appears to be an overturned car.
Austria one of the counties worst hit had more than 3 meters, (10ft) of snowfall on Thursday and Friday.
The storms have now killed at least 21 people with more missing.
Avalanche warnings have been placed at critical levels across much of Europe following heavy snow which has triggered red weather alerts - as forecasters warn the snow is set to continue into the middle of next week.
A state of emergency has been declared across much of southern Germany with troops brought in to help people who have become trapped, while the army has also been deployed in Albania, Montenegro and Serbia.
Austrian military helicopters on Friday flew 66 German teenagers out of a mountain guest house where they had been stuck for several days.
About 2,000 soldiers and other emergency workers in Albania were assigned to help people trapped by snow and to clear roads to restore access to cutoff villages. According to the BBC, the Austrian military sent helicopters to blow snow off treetops to reduce the risk of trees falling on roads and rails.
In Sweden, wintry storms ravaged parts of the north.
One area recorded winds of 49.7m per second (111mph) as Storm Jan ravaged Stekenjokk near the Norwegian border. 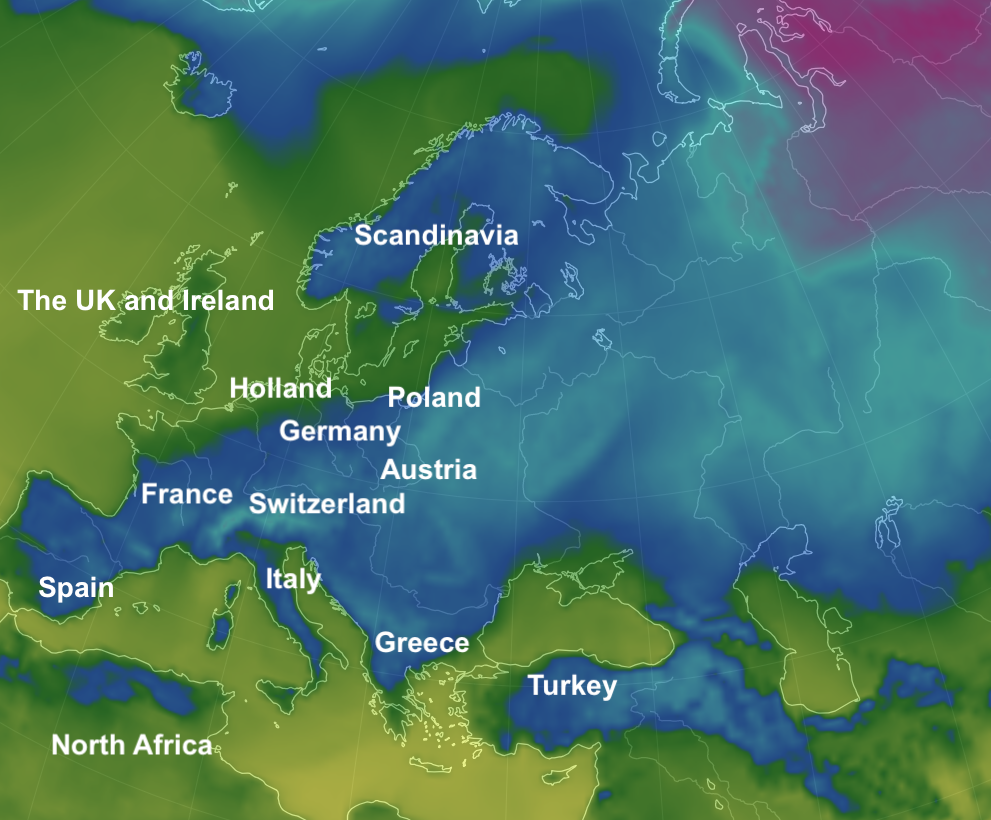 Earthwindmap showing record cold in parts of Europe.
In northern Norway, a lorry driver described on Friday morning how he and other drivers had been stuck on a mountain road since 17:00 (16:00 GMT) on Thursday.
Magnar Nicolaisen told public broadcaster NRK that he had slept in his cabin overnight while others had had to stay in their cars.
Conditions on Friday were particularly treacherous in Bavaria, where the local broadcaster said snowfalls were paralysing public life.
Rail services were worst hit in the south and east of the state and roads were cut off by drifts and falling trees.
According to The Daily Mail, about 2,000 soldiers and other emergency workers in Albania were assigned to help people trapped by snow and to clear roads to restore access to cutoff villages. Several towns and cities in southwest Serbia introduced emergency measures, warning of snow piling up on the roads and sealing off mountain villages, Serbian state TV reported Friday.
Most schools in the area closed down and 10 people had to be rescued from their homes.
Strong winds complicated the work of emergency crews.
In neighbouring Montenegro, meteorologist Dragan Buric said the first 10 days of January have been among the coldest the country has seen in decades.
"We have snow in January in the capital city (Podgorica) for the first time in nine years," Buric told Montenegrin state TV.