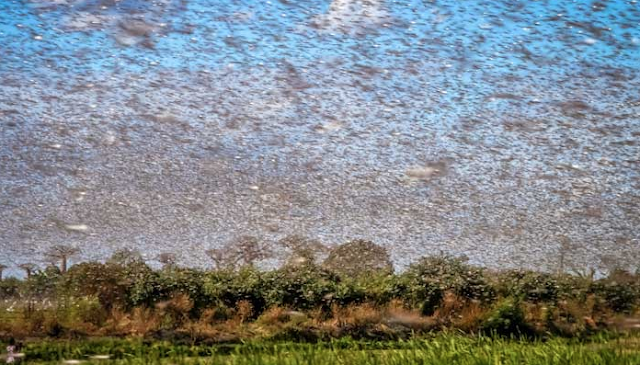 Photo yucatanexpatlife.com
After thousands of locusts arrived at the beaches of Progreso and Sisal three days ago, the swarm has now moved all the way to Merida.
The Yucatecan capital witnessed hundreds of thousands (probably millions) of these insects who covered the sky like a cloud, blacking out the sun at some points.
Many social network users reported the event through their accounts.
The plague of locusts was detected in several neighbourhoods of the city and the cybernauts shared images and videos of the arrival mentioning @climaYucatan.
One of the main characteristics of these insects is their great ability to migrate from one place to another and, in certain circumstances, reproduce very quickly, forming devastating pests that can destroy entire crops, which is why these insects are considered extremely harmful for agriculture.
In fact, they are a certain species of short-horned grasshoppers in the family of the Acrididae that at some point in time have a swarming phase.
These insects are usually solitary, but under certain circumstances they become more abundant, and change their behaviour and habits, becoming gregarious.