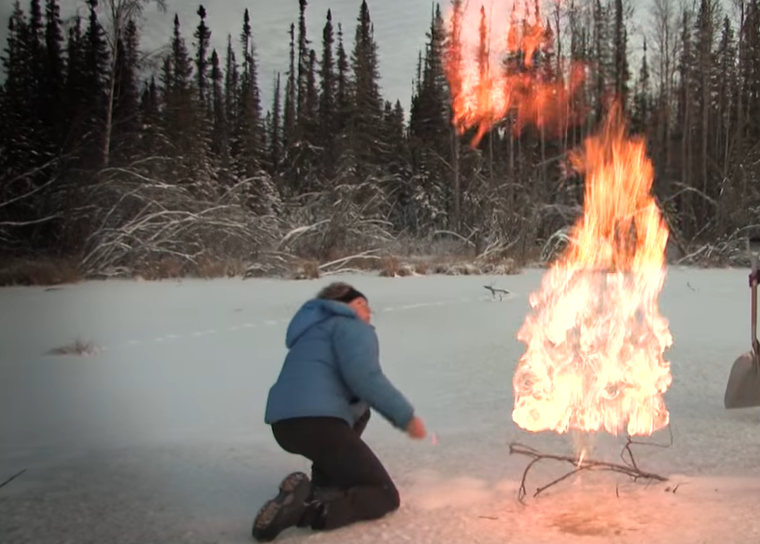 NASA has released videos of bubbling lakes in the remote Arctic tundra, where warming continues to release greenhouse gases into the atmosphere at unprecedented rates.
The international research team, funded by NASA as part of their Arctic-Boreal Vulnerability Experiment (ABoVE), recently published their results in Nature Communications.
What they found are bubbling lakes as greenhouse gases are released from the previously frozen ground, leading to increased greenhouse gas emissions and a warming positive feedback.
The Arctic is one of the largest natural reservoirs of organic carbon, trapped within the frozen soils.
If a tree dies, say in the Amazon rainforest, it is quickly eaten (rot) away by bacteria, which respire the same as humans.
As bacteria eat the tree they inhale oxygen and release carbon dioxide.
Hence, the carbon taken up by the tree through photosynthesis is then released back into the atmosphere as carbon dioxide for the cycle to start all over again.
However, in the case of the Arctic, when something dies (trees, algae, animals, etc.) they are immediately frozen.
This, in essence, stops the carbon cycle as both bacteria and their food are frozen in place for potentially tens of thousands of years.
This means the Arctic continues to pack away carbon from the atmosphere and store it in frozen soil, which can be over 250 feet thick.
However, when that soil begins to thaw, the bacteria wake up and find a feast of untouched carbon laid out for them, they begin to eat the carbon, releasing carbon dioxide and methane gas as they do. In the NASA video what you see is the resulting carbon dioxide and methane gases released from the thawing of Arctic lake beds.
As the sediment beneath these lakes begins to melt, they become greenhouse gas factories.
In addition, the team investigated the presence of thermokarst lakes.
These small pocket lakes are produced from melting permafrost.
As permafrost in an area melts, it releases a large amount of water and since ice has a larger volume than ice when permafrost melts the land in the area tends to sag.
This small depression creates a small lake, which leads to faster melting of the permafrost and quicker release of greenhouse gases.
This sudden release of greenhouse gases triggers a positive feedback as it adds to the overall warming.
What the NASA funded researchers are finding is that this process can be quite abrupt, leading to a larger and quicker impact on global warming.
Large releases of carbon are not decades or centuries away, they are rapidly happening today and with it, changing the landscape of the Arctic.