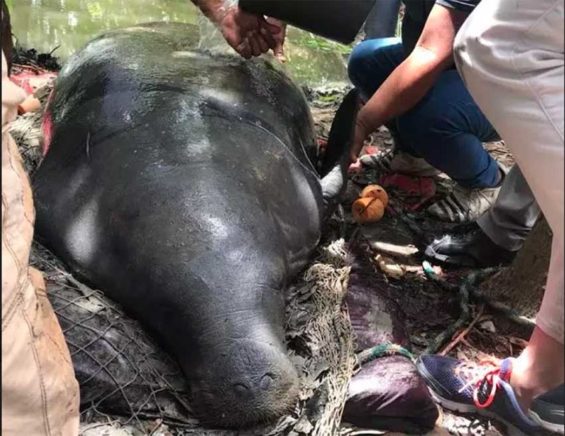 Photo mexiconewsdaily.com
As many as 50 manatees have died, floating to the surface of rivers and lagoons in Mexico's southern state of Tabasco, where some of the country's major oil wells have been operating for decades.
Fish, reptiles, birds and other marine animals have also died suddenly, and scientists are scrambling to figure out the cause.
"It could be one of the greatest environmental emergencies we have had in recent times," Ernesto Zazueta, president of the Association of Zoos, Breeders and Aquariums of Mexico (AZCARM), told the El Universal newspaper.
On May 18, residents of the municipality of Bitzales found a lifeless manatee floating in the water. They assumed it was an isolated incident, or that the animal had been sick.
But in the weeks the followed, more and more dead manatees were found in the state's waterways. Fishermen reported that suddenly they weren't catching anything, and dead fish also began floating to the surface.
Officials have sampled the water and carried out necropsies on the animals, but the cause of the die-off remains a mystery.
One study from the Aquatic Resources Research Laboratory at the Technical University of Boca del Rio found high levels of lead and cadmium in the water.
But other biologists said toxic substances have not been found in their tests of the water and the manatees.
Another study commissioned by the federal government and the National Autonomous University of Mexico said the die-off was possibly the result of a range of factors, including rising water temperatures.
For about 40 years, Mexico's state oil company, Petroleos Mexicanos (PEMEX), has operated oil wells and gas facilities in the vicinity of the die-off.
Locals have begun to blame the company for the crisis, which has also affected the livelihoods of thousands of fishermen in the state.
PEMEX has denied responsibility, saying that it sent experts to the site to investigate.
"There is no (Pemex) activity adjacent to the tributaries where the problems have been identified," the company said in a statement.
It added that the facilities in the area are "operating normally, without any record of a leak or spill." But a journalist for El Universal who reported from the scene wrote that there are two Pemex oil wells in the vicinity of the affected area.
The company has maintained some of its largest operations in the state of Tabasco since the oil industry was nationalized in the 1930s.
Residents of Tabasco, including the president-elect, Andres Manuel Lopez Obrador, have railed against the environmental damage caused by the industry.
The government of Tabasco has identified 29 dead manatees, but residents say the number is closer to 50.
Scientists have begun relocating manatees in the area to aquariums and research centres, transporting five of them.
Manatees were taken off the endangered species list last year, in part due to the animals' recovery in Florida.
But they remain a "threatened" species.
"We are trying to recover the largest number of these organisms and confine them in a quarantine where we can give medical treatment and follow up on their behaviour," Diego German Arellano, a director in the Ministry of Energy, Natural Resources and Environmental Protection told Televisa. Arellano explained that a team of biologists would travel by boat through the area to identify manatees swimming with difficulty and relocate them to specialized facilities.