Another update from Bill in Alaska: Radiation rise in Pacific fish this year is terrifying! RF Radiation from cellphone towers killing spruce trees 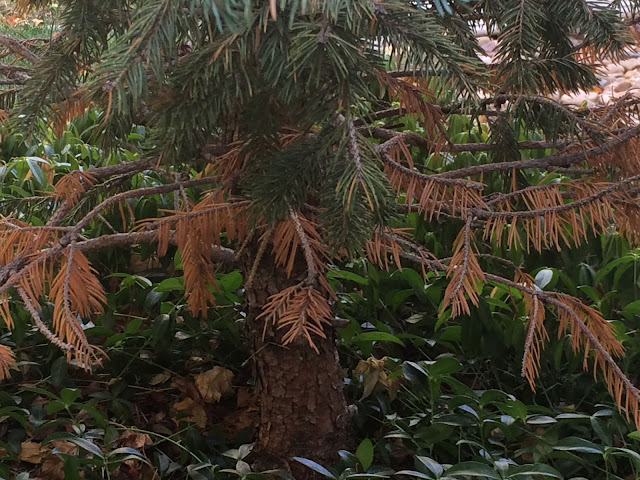 Another couple of updates from Alaska:

The biologist became very argumentative with me. She said, ‘you can’t use a radiation monitor for evaluation of ambient dosage of gamma radiation.’ The meter I use by Quarta, a Radex, model RD 1503, is made to test gamma radiation in homes, offices, food products, construction materials, soil and etc. She told me that was impossible, you would have to go inside the fish to get an accurate reading with a meter and if was true, the government would have alerted them. She informed me that these type of radioactive isotopes were short lived and the incident was so long ago that it could not be affecting salmon today.

Onto another note: Last month I went north to pick up two new sled dogs for my team. On my return home, I stopped by to see another musher. When I pulled into their dog yard, with which I am very familiar, I saw that every one of their black spruce trees were dead! Asking them about this, they said it happened in a very short matter of weeks. They thought it could have been the Japanese bark beetle that had killed them. I was reminded that rarely were small black spruce trees killed by the beetle because they have so much sap in them, when the beetles bore in, they could drown. 100% of all their spruce trees were dead, including the small ones.

One thing I learned in college is that if you have questions, you need to think outside the box. I noted a new cell tower that could be seen from their dog yard had just come online. Now I will tie this into my dog yard. Approximately 10 days ago I noticed that the bulk of my spruce trees, including even the smallest of trees, were starting to die off and it came on overnight. Daily the needles are becoming a more orangy-brown.  I have had healthy trees so I started checking even the small trees for the beetle with no sight of them found.

The thought popped into my mind that maybe this was a cell tower problem. As I stated in a past writing, my GPS shows me that I am 4.8 miles from the nearest tower. I would like to remind readers of this article that scientists have shown pine needles prematurely age at .000027 micro-watts centimeter squared. I placed a call to a man who works for a major cell phone company and does cell tower repair. I have been having conversations with him about the coming 5-G cell towers. I asked him if anything had been done recently to the local cell towers because I had noticed my cell phone was working a little bit better. He said, ‘Oh, yes! Good to hear it’s working better. We’ve increased the output and frequency range of the tower closest to your cabin. The biggest plus is the addition of lower frequencies that should help you with your cell service.’ This, he said, was done all in the last couple of weeks. He informed me they were doing this to multiple cell towers all over Alaska.

I have no way of proving it, but when I considered the dog yard up north with all of its dead spruce trees within eye sight of a new cell tower and my trees overnight seemingly start to die about the time this cell tower had changed its broadcast signal, I have to think that the RF Radiation from that tower is killing my trees. If they continue dying as the trees up north that I saw, in the next few weeks I will likely have to start dropping my forest to prevent them from becoming fuel for any potential forest fire. I am starting to document my report with pictures.

I strongly encourage anyone who is noting such things in their personal environment to buy themselves a good meter. I suggest the German made meter by Gigahertz Solutions. I really like their meter HF 35 C. It is an awesome HF analyzer. It has a range from 800 MHz-2700 MHz. I also suggest that everyone watch the movie, “Full Signal, the Hidden Cost of Cell Phones” – a 2010 documentary by Talal Jabari or go to www.FullSignalMovie.com and watch the documentary, “Take Back Your Power” – a 2014 documentary by Josh Del Sol. Go to TAKEBACKYOURPOWER.NET. In short, between the oceans and the cell towers, I believe we are killing ourselves with radiation.

I am not an expert but I do have enough common sense to be able to do basic math and I know that 1 and 1 = 2. The common factors in this radiation equation appear to me to be quite obvious and it doesn’t take the brain of a professor or a government worker to figure it out.


Greetings Gary and Readers of The Big Wobble,

I have been noseying around and asking a few people in the industry details about the new 5G that is used for wireless communication. I recently talked to a source in the industry whose name I will keep private in order to protect his job. He finds and maintains cell phone towers. According to him, 5G will not officially hit the market until 2020 in Alaska. It is expected to only be in larger populated communities due to their exorbitant cost. According to this source, 5G has greater bandwidth with some of the frequencies being very low.

This will enable them to handle heavier traffic with more data being transferred. He told me that for it to work correctly, due to the law of physics, the ping from the signal has to be able to transmit between the towers at no less than 1 millisecond per ping. This means the cell towers cannot be further that one mile apart (1.609344 Kilometers).

With the cost of so many needed cell towers, it is likely Alaska would only have 5G in Anchorage, the Matanuska and Susitna Valley, as well as Fairbanks. For areas such as the one in which I live, it would not be cost effective to plug into 5G.

This is going to bring a massive increase in Electro Magnetic Radiation. This will not only greatly affect humans but animals, birds, and insects as well as vegetation. The electrifying truth is that the fuller the signal spectrum that is fed to us in this invisible toxic form, the greater the cost to this planet.

The World Health Organization and many scientists around the world who study the effects of cellular technology on human beings are trying to get the word out, ‘We are in deep trouble.’  You will likely need to think about shielding your home, sleeping under Faraday shields, and wearing protective Faraday clothing, especially if you are an expectant mother.

I also would like to recommend the book by Kerry Crofton, Ph.D, titled, “Wireless Radiation Rescue 2012.” The book is pricey but well worth it.

Let’s get the word out!