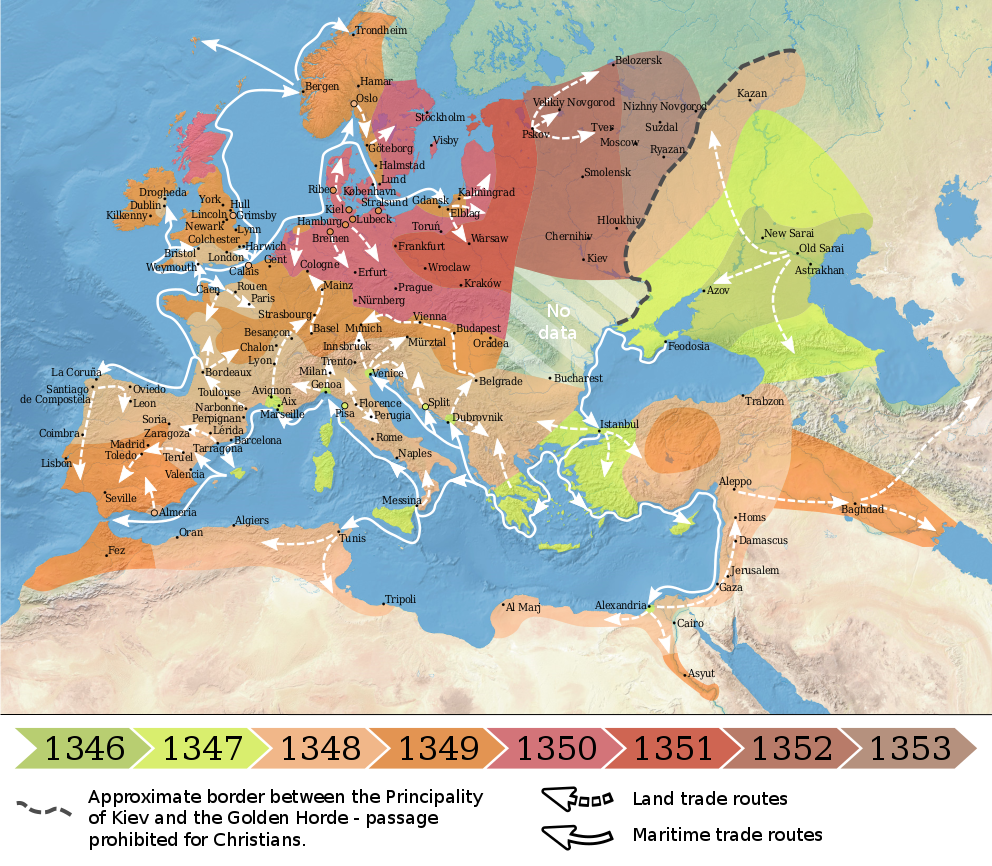 Map Wikipedia
A cat in Big Horn has been confirmed to have been infected with the plague, the state Department of Health announced [Wed 29 Aug 2018].
There are no known human cases in that area or in Wyoming as a whole.
There hasn't been a confirmed case since 2008, according to a department press release.
The cat "is known to wander outdoors," the release said.
The case comes a little over a year after the plague was found in prairie dogs in the Thunder Basin National Grassland, the 1st time the disease popped up there in more than 15 years.
"Plague is a serious bacterial infection that can be deadly for pets and for people if not treated as soon as possible with antibiotics," Alexia Harrist, state health officer and epidemiologist, said in a statement.
"The disease can be transmitted to humans from ill animals and by fleas coming from infected animals."
Department spokeswoman Kim Deti did not immediately return a request for comment late [Wed 29 Aug 2018] morning.
There have been just 6 cases of plague in humans here since 1978, according to the department.
The United States overall averages 7 human cases a year.
Signs in pets include swelling in the neck, face or ears; lack of energy; fever; chills; coughing; vomiting; diarrhoea; and dehydration.
Humans have similar symptoms, along with difficulty breathing, headaches and abdominal pain.
The department recommends using insect repellent on boots and pants in areas possibly having fleas; using flea repellent on pets; properly disposing of rodents brought home by pets; avoid exposure and contact to rodents dead or alive, and avoid areas with "unexplained rodent die-offs."

The Black Death, also known as the Great Plague, the Black Plague, or the Plague, was one of the most devastating pandemics in human history, resulting in the deaths of an estimated 75 to 200 million people in Eurasia and peaking in Europe from 1347 to 1351.
The bacterium Yersinia pestis, which results in several forms of plague, is believed to have been the cause.
The plague created a series of religious, social and economic upheavals, which had profound effects on the course of European history.
The Black Death is thought to have originated in the dry plains of Central Asia, where it travelled along the Silk Road, reaching Crimea by 1343.
From there, it was most likely carried by Oriental rat fleas living on the black rats that were regular passengers on merchant ships, spreading throughout the Mediterranean and Europe.
The Black Death is estimated to have killed 30–60% of Europe's total population.
In total, the plague may have reduced the world population from an estimated 450 million down to 350–375 million in the 14th century.
It took 200 years for the world population to recover to its previous level.
The plague recurred as outbreaks in Europe until the 19th century. Credit Wikipedia.

Madagascar
In November 2017, a total of 2119 confirmed, probable and suspected cases of plague, including more than 200 deaths were reported by the Ministry of Health of Madagascar to the World Health Organization, WHO.
The island off the east coast of Africa is no stranger to the Bubonic Plague with small outbreaks every year, what was disturbing this year, however, was the fact most of the cases in this year's outbreak was the pneumonic plague, a more virulent form that spreads through coughing, sneezing, or spitting and is almost always fatal if untreated.
For the 1st time, the disease long seen in the country's remote areas was largely concentrated in its 2 largest cities, Antananarivo and Toamasina.

Peru
In December 2017 Peru was the latest country to discover rats infected with the plague after the epidemic scare in Madagascar.
Russia
A ten-year-old boy in Siberia's Altai Republic contracted the bubonic plague, local medics told TASS in July 2017.
The boy was hospitalized with a high fever and tested positive for bubonic plague.
It is thought he later died.

United States
2 bears were found in California with the plague just last summer: Positive bear samples were found in 32 counties in California.
Navajo County Health Department was also urging the public to take precautions to reduce their risk of exposure to this serious disease, after being found in rodents in the Arizona county.
The Apache County Health Department recently notified the public about a new prairie dog die-off in Concho, Arizona, in August 2017.
In June 2017, two more cases of human plague were confirmed in New Mexico.
The New Mexico Department of Health said a 52-year-old woman and a 62-year-old woman were recently diagnosed with the plague.
According to health officials, the first confirmed case of the plague last year occurred in June when a 63-year-old man contracted the plague.

Canada
In July last year, Parks Canada closed off a Saskatchewan national park's remote prairie dog colony to the public after two rodents from the area tested positive for sylvatic plague — the same bacteria that causes the bubonic and pneumonic plagues in humans.
According to the World Health Organization, more than 13,000 people contracted bubonic plague in Asia, Africa and America between 2004 and 2013.
Roughly 900 of them died from the disease.
250 have died in Madagascar this year in just two and a half months, which is thought to be the biggest outbreak in 50 years.