28 people dead and more than 2,200 others have been treated in hospital after South Korea's all-time heat record smashed 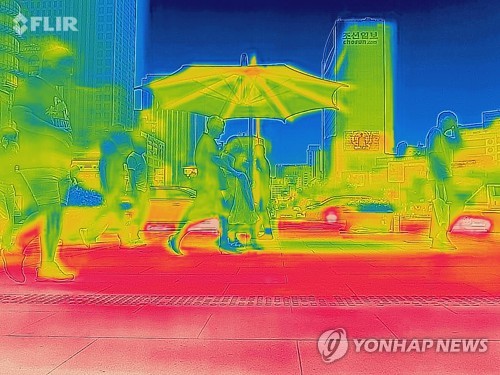 Photo Yonhap news,
Burning hot This photo, taken by a thermal imaging camera, shows people walking at Gwanghwamun Square in Seoul, which became red amid an all-time high daily temperature of 39.6 degrees Celsius in the city on Aug. 1, 2018. (Yonhap)
The Korea Meteorological Administration said the temperature in Hongcheon, a city in the country's north, reached 41.0°C (105.8°F) at 4 p.m. local time on Wednesday.
In Seoul, the temperature hit a local record of 39.4°C (102.9°F).
The temperature in Hongcheon smashes South Korea's all-time record, which was set only 8 days prior when the temperature hit 40.2°C (104.3°F) near Yeongcheon.
The July 24 temperature, in turn, broke the record of 40°C (104°F) that was set in 1942.
"This is ridiculous.
I think I am living in a tropical country," resident Cho Hyun-soo told The Korea Times.
"I just came from my break in Bangkok, and it was 34 degrees (93.2°F) there.
The weather in Southeast Asia is much cooler than in Korea. I don't know where I am living."
The unusually long and intense heat wave follows a rainy season that lasted only 16 days, which is half of the normal average.
Forecasters expect that the heat in South Korea will continue for the next few days with little rain in sight.
So far, at least 28 people have died and more than 2,200 others have been treated for heat-related ailments, according to the Yonhap news agency.
Because heat-related deaths are historically under-reported, the true death toll is believed to be in the hundreds or thousands.