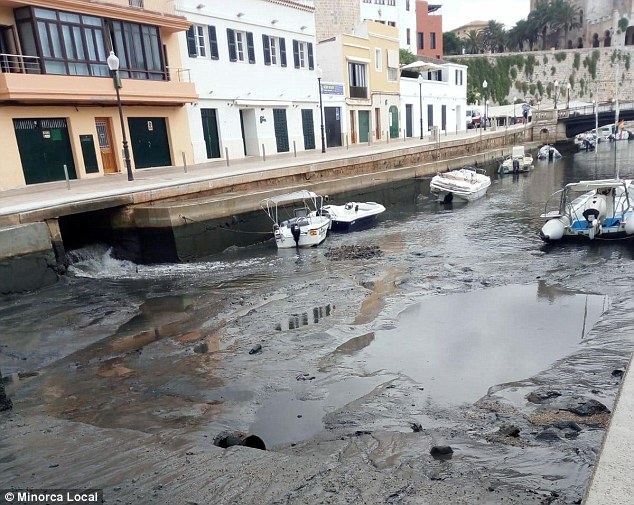 The freak weather phenomenon also smashed holiday resorts with seawater flooding bars and covering beachside roads.
A mini-tsunami has smashed tourist beaches in Spanish holiday hotspots - flooding streets and bars popular with Brits.
A massive wave measuring nearly five feet hit the port city of Ciutadella on the west coast of Menorca early this morning.
Nearby beaches were also flooded by a tsunami-like wave known as a "meteotsunami."
The freak weather phenomenon also impacted holiday resorts in Majorca, with seawater flooding bars and terraces by the coast in Andratx and covering beachside roads.
Boat owners in the resort on the island's south-west coast were filmed trying to protect their boats. The strong current broke the ropes of a historic sailing boat used by the Majorca Island Council which had to be rescued by sailors and brought back to port as it drifted out to sea.
There were no reports of any injuries and the meteotsunami occurred when the beaches were largely empty before holidaymakers started to arrive for their daily dose of sun.
Meteotsunamis, also called meteorological tsunamis, are generated when rapid changes in barometric pressure cause the displacement of a body of water.
Last summer, one of the giant waves was filmed hitting the coast of the Netherlands and catching beachgoers off guard.
Beach chairs, boats and parasols were swept away by the wave.
A meteotsunami is generated when rapid changes in atmospheric pressure cause the displacement of a body of water.
It often emerges as the forerunner of a thunderstorm and a cold weather front.
Meteorologists speak of an inversion when the air on the ground is cooler than in the upper air layers, which then changes the air pressure causing the meteotsunami together with strong gusts.
Meteotsunamis have also been recorded in the United Kingdom.
The first ever officially identified British meteotsunami hit the Cornish coastline in June 2011.
British researchers first became aware of the meteotsunami after people walking across St Michael's Mount causeway suddenly found themselves standing in water.
Professor David Tappin of the British Geological Survey said: "Most tsunamis are geological, where you have a vertical movement on the seabed which can be caused by an earthquake, like in Japan in 2011 or a landslide.
"Meteotsunamis, however, are created by weather.
You need a small, rapid change in atmospheric pressure of just a few millibars, if you get one of these then it can change the sea surface elevation by a few centimetres.
"In the deep ocean this would not be noticeable but when it enters shallow water whilst the weather system is moving at the same speed then the sea level increases by several metres."