Vancouver Island on the move: Episodic Tremor and Slip event feared after more than 150 tremors hit the island in the last 24 hours 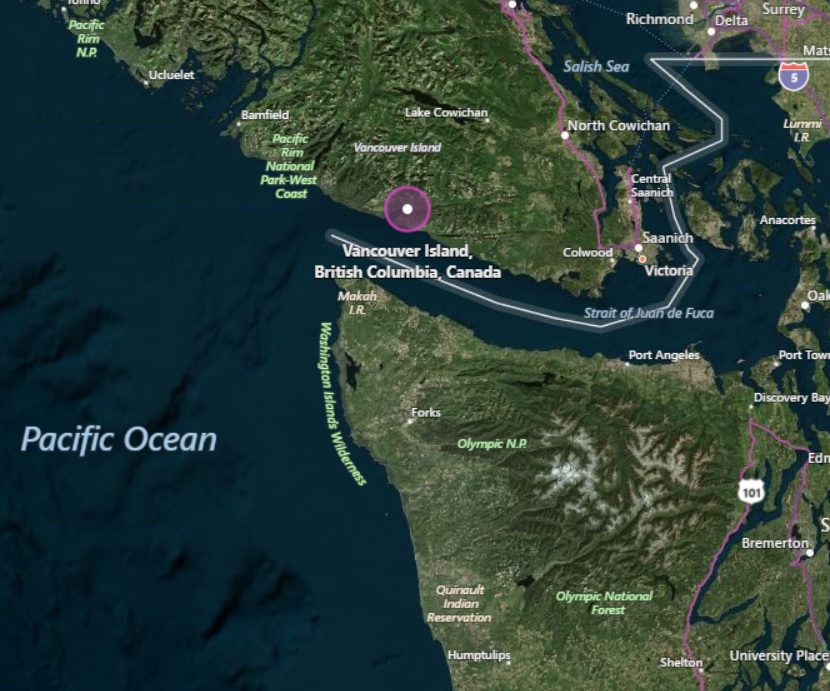 Google maps
More than 150 tremors have hit Vancouver Island in the last 24 hours, and seismologists are monitoring the situation to see if it turns into an Episodic Tremor and Slip event.
Vancouver Island is normally moving toward the Lower Mainland at a rate of about one centimetre per year.
"Ferry fares keep going up but the distance is actually getting a little bit shorter," jokes John Cassidy, a seismologist with the Geological Survey of Canada.
But every 14 months or so there is a Tremor and Slip event - a discovery made by two local scientists Gary Rogers and Herb Dragert - when Vancouver Island slips backwards a few millimetres towards Japan.
Seismic recording instruments show Victoria moving in one direction and then changing direction for about two weeks during these episodes.
These events add pressure to the locked Cascadian Subduction Zone fault.
"It involves tiny tremors that we can record.
They are not earthquakes.
People don't feel these shaking events.
But we can easily record them over many seismic stations at the same time," said Cassidy.
"It looks like a train or a rumbling."
You can see the energy building up slowly and then dropping off slowly, says Cassidy.
It's not a typical earthquake signature.
It's more of a rumbling vibration sort of signal.
The tremors are recorded and mapped out, to show where the slip is taking place.
It helps to identify the locked portion of the subduction fault where all the energy is being stored for future earthquakes.
"This is a really important piece of information to help us understand the subduction zone where these big earthquakes are more likely to occur," said Cassidy.
"It doesn't help us predict when an earthquake will occur, though."
Due to the fact that Episodic Tremor and Slip events give a slight nudge to a locked fault, it is a period of slightly higher hazard but Cassidy assures that it is not a huge change.
"It is similar to driving in slightly heavier traffic than you normally would.
There might be slightly more risk," said Cassidy.
"Bottom line is that we live in a subduction zone where earthquakes can happen at any time.
These tremors are a reminder to us that we do live in an active zone and to be prepared."
It will take a week of monitoring the situation to see if a slip takes place.