While parts of North America had its coldest April for 20 years April 2018 was 3rd warmest on record for the globe...NOAA 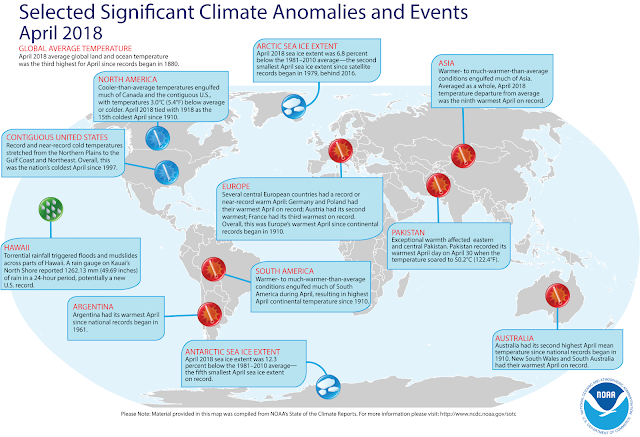 Click on image to enlarge and read credit NOAA.
The crazy weather of 2018 in the US took a turn away from the global warming trend when NOAA claimed last month the U.S. had its coldest April in more than 20 years
Below-average temperatures spanned the Rockies to the East Coast.
Many citizens were left asking the question, when will winter end after a powerful spring storm is pummeled the U.S. Midwest and Plains as summer was put on hold with a late-season storm causing chaos in mid-April.
Record cold and even snow in some areas delayed the onset of warm spring-like conditions.
According to the National Oceanic And Atmospheric Administration (NOAA), The average April temperature across the contiguous U.S. was 48.9 degrees F (2.2 degrees below average), making it the 13th coldest April of the 124-year record, according to scientists from NOAA’s National Centers for Environmental Information.
This was the coldest April since 1997.

Last week NOAA released their global report for April and...While North America had its coldest April since 2013, the rest of the world was downright balmy.

Below is a list of NOAA highlights for the weather globally in April.

Record and near-record-warm temperatures were felt across Europe and from Argentina to Australia, making it the third hottest April on record globally.

Climate by the numbers
April 2018
The average global temperature for April 2018 was 1.49 degrees F above the 20th-century average of 56.7 degrees.
This was the third highest for April in the 139-year record (1880–2018). Nine of the 10 warmest Aprils have occurred since 2005.
April 2018 also marks the 42nd consecutive April and the 400th consecutive month with temperatures above the 20th-century average.

The year to date | January through April 2018
The year-to-date average global temperature was 1.37 degrees F above the 20th-century average of 54.8 degrees.
This was the fifth warmest average temperature for the year to date on record and the coolest such period since 2014.
The years 2015, 2016 and 2017 ranked among the three warmest years to date periods on record.

The average Arctic sea ice coverage (extent) in April was 6.8 percent below the 1981-2010 average, ranking it the second smallest extent since records began in 1979.

Antarctic sea ice coverage in April was 12.3 percent below average and the fifth smallest on record for April.

The globally averaged, land surface temperature ranked ninth warmest for April and sixth warmest for the year to date (through April).

South America and Europe led the continents in warmth rankings

South America and Europe had their warmest April on record; Oceania, its second; Africa, its fifth; Asia, its ninth; and North America, its 94th (where 2018 tied with 1918 as 15th coldest).

NOAA's full report for April can be found here