Dante's Inferno! Severe drought billions of dead trees and terrorism promise the worst year ever for wildfires in North America 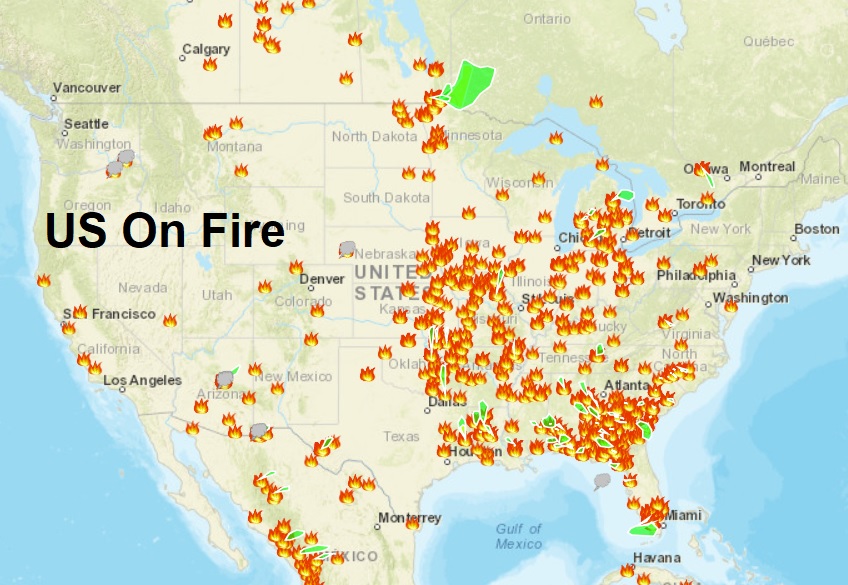 Current wildfires in North America credit NOAA
Oklahoma
Last year was the worst ever for wildfires in the US and this year appears to be starting early.
Oklahoma is currently struggling with several wildfires this month resulting in Oklahoma's governor, Mary Fallin calling a state of emergency in 52 counties due to wildfires which are thought to have killed thousands of cattle and wild animals.
According to Rod Hall, Oklahoma state veterinarian put preliminary cattle deaths at roughly 1,100 head and expects that number could eventually climb to around 2,000.
“We’ll never know the exact number and people are also still finding dead animals,” Hall said in an interview, adding that recent rains helped contain most of the blazes.
According to Reuters, Oklahoma is the nation’s fifth-largest cattle producing state with more than 5 million head.
While cattle losses were devastating for affected ranchers, overall livestock prices should not be affected, said economists and state officials.
Some cattle died directly from the fires while others were later euthanized due to injuries or smoke inhalation, he said.
Many Oklahoma pastures had not received adequate moisture for more than 200 days.
Animals in these areas were caught off-guard when flames were fanned by winds of up to 60 miles per hour (97 km per hour).
Some of the acres destroyed were much-needed grazing land for cattle, state officials said.

Arizona
Firefighters battling a wildfire in north-central Arizona were hampered Monday by strong winds and dry conditions as residents of surrounding communities remained out of their homes for another day. Authorities said some homes were lost as the wildfire consumed almost 14 square miles (35 square kilometres) south of Flagstaff.
About half of Arizona is in the worst two categories of drought, a stark change from a year ago when only some areas were characterized as abnormally or moderately dry.
The wildfire in Arizona is one of the most active in the country, according to the National Interagency Fire Center.
Weather forecasters have warned the fire season will be dangerous and life-threatening.
Colorado
With more than a billion dead trees Colorado is an accident just waiting to happen!

Authorities have ordered the evacuation of a central Colorado subdivision after a grass fire threatened some residences.
Park County officials issued the mandatory evacuation order Sunday afternoon for the Ranch of the Rockies subdivision, which is about 75 miles west of Colorado Springs on the Park County border.
It was not immediately known how many people lived in the evacuation zone.
The fire was reported around 11:30 a.m. and initially covered five acres.
Gusting winds and warm temperatures threatened to fan the blaze.
The fire was believed to be human-caused...The new weapon of terror? A massive wildfire in Australia which has hit parts of Sydney started deliberately according to authorities