Photo Credit Yorkshire wildlife trust
Around the shores of the UK millions of marine life have been washing up on beaches after "The Beast From The East" and Storm Emma impacted Ireland and Britain last week.
Untold millions of dead and dying animals are being reported around the country.
According to Yorkshire Wildlife Trust, tens of thousands of animals washed up on the beaches after the storm.
Tens of thousands of marine animals have been washed up along the UK’s east coast following the cold temperatures and rough weather over the last week.
Crabs, starfish, mussels and lobsters are ankle-deep in places along the Holderness coast in Yorkshire.
Most of the animals are now dead – except for lobsters.
Yorkshire Wildlife Trust’s Living Seas team have been working alongside local fisherman rescuing the lobsters that are still alive - gathering them in buckets and taking them to tanks in Bridlington for care - putting them back in the sea as the weather improves.
Similar scenes have been reported down the North Sea coast including Norfolk and Kent.
Thousands of dead starfish washed up on a beach in Ramsgate Kent following the 'beast from the east' weather snap. 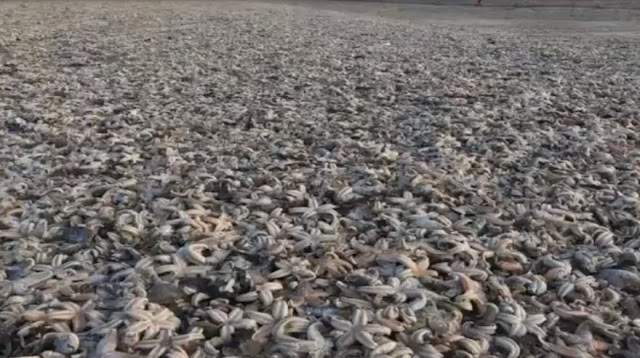 The spectacular scene was described as "like the Armageddon" by wildlife enthusiast Lara Maiklem, 47, who photographed the phenomenon.
She estimated "hundreds of thousands" of starfish and other sea life were washed ashore this weekend following the spell of subzero temperatures.
The BBC reported Dead marine life, debris and mysterious "solid deposits" have been washed up on the beaches of West Norfolk in the wake of Storm Emma.
"There's no cause for concern but samples have been taken for analysis," said West Norfolk Borough Council in a series of tweets.
Strong winds and large waves left thousands of starfish and shellfish on the miles of beaches between Hunstanton and Old Hunstanton.
They also brought in what the borough council called "solid deposits", which are now being analysed.
Elsewhere the severe weather conditions in Britain have uncovered an ancient forest which usually lies hidden under the sand, see below. 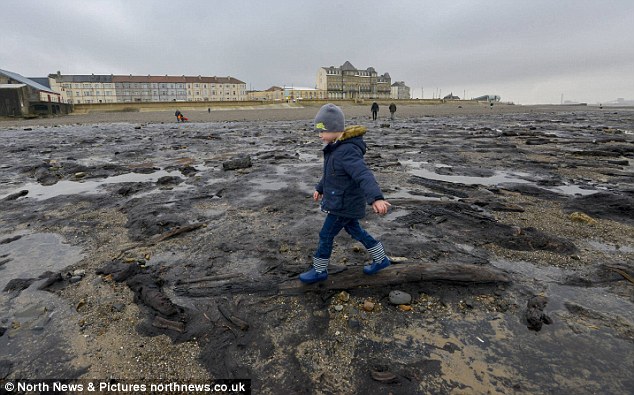 Credit www.northnews.co.uk
The woodland in Redcar and Cleveland dates back 7,000 years and is very rarely visible, but the extreme weather has shifted the sand - meaning that the ancient tree stumps and felled logs can now clearly be seen on the shore.
Although only a stretch of around 400 yards has emerged, since Storm Emma the forest runs for several miles along the coastline, according to the Daily Mail.