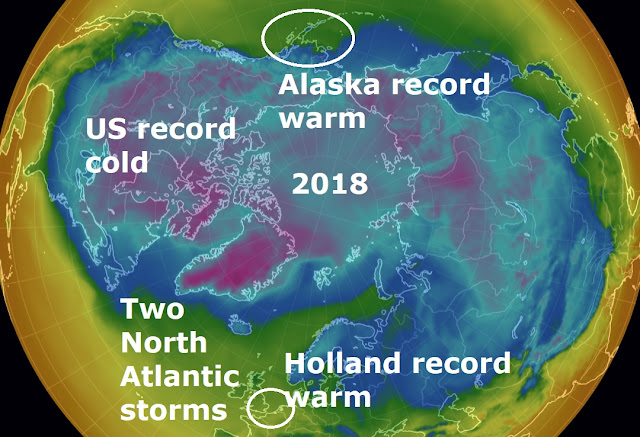 While the most of the United States is dealing with record cold and ice, residents of Alaska are enjoying unusually warm weather.
In some parts of the country temperatures reached 10 degrees, which is unusual at this time of year, BNT reported.
According to the meteorological office, the warm weather is due to a tropical wave invading the north.
But people in Alaska are pleased with the sun and almost the spring weather, all the more so that temperatures are expected to fall in the near hours.
The record-shattering Arctic cold which has hampered the new year celebrations in parts of the US has now reached the deep south as freeze warnings were put in place for Florida and Texas on Monday.
The Gulf Coast did not escape the Arctic blast, Alabama's coastal region reached an incredible low of 16 F (minus 9 C) overnight with cruel winds creating dangerous conditions across Georgia and most of northeastern Florida.
Earlier in the week, a report by The Atlantic White Shark Conservancy said it had found three dead thresher sharks frozen to death on the shore of the Cape Cod Bay in Brewster, south of Boston.
Glass windows were said to be cracking on Chicago's new Apple building from the extreme cold temperatures, and low temperatures in the minus 40 deg F (-40 deg C) have been recorded in northern Minnesota this week.
Many cities had their coldest new years eve ever when many cancelled celebrations.
Niagara Falls turned to ice as temperatures plummet to record-breaking lows.
The Sun reported, it was the coldest New Year in living memory as 220 million Americans wrapped up to face lows of -37 degrees Celsius.

The crazy weather also brought record warmth to parts of western Europe, while parts of the US were colder than Mars Holland was enjoying it's warmest new years eve in living memory as the Limburg town of Ell recorded a temperature of 14 deg C (57. 2 deg F).
The previous record was established in 2006 when it was 13.3 degrees in Woensdrecht.
Holland is currently warmer than parts of Spain, Greece and parts of Italy.