Just five days after falling off his bike, little eight-year-old Liam Flanagan dies from deadly Flesh-eating bacteria in Portland US 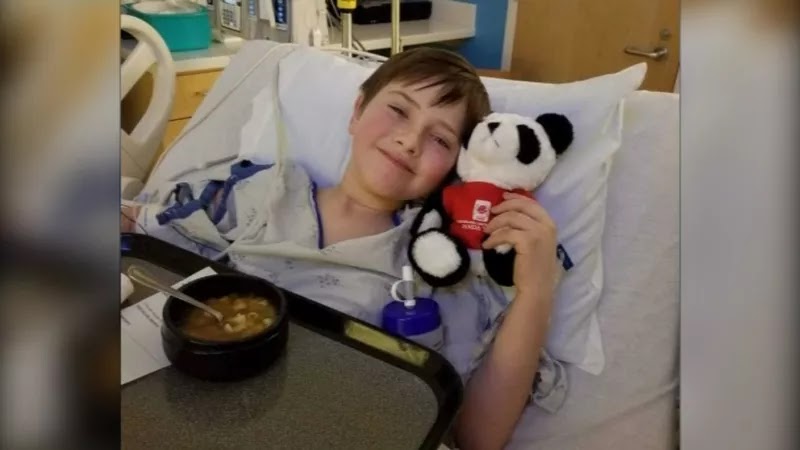 Sara Hebard said her 8-year-old son Liam Flanagan just fell off his bike and cut his leg near the family's Pilot Rock farm, but that would eventually became infected by a flesh-eating bacteria that caused the boy's death. (photo courtesy Sara Hebard)
Eight-year-old Liam Flanagan was riding his bike down a hill in a Pilot Rock, Ore., on Jan. 13 when he crashed and cut his leg.
The boy was taken to the hospital and received seven stitches on his upper thigh.
But three days later, he complained his leg was still hurting while he was at school, his mother, Sara Hebard told NBC News.
He said the pain was getting worse in his groin area.
Hebard and Liam's stepfather, Scott Hinkle, looked at the wound and were startled at what they saw. Flesh-eating bacteria, which likely entered his wound from the soil, attacked the boy's soft tissue.
He was rushed in for emergency surgery at St. Anthony Hospital in Pendleton, Ore., to remove the infected tissue.
But the wound was only getting worse.
On Jan. 18, Liam and his mother flew by air ambulance to Doernbecher Children's Hospital in Portland.
Surgeons tried to stay ahead of the rare but deadly infection, known as necrotizing fasciitis, by amputating parts of the boy's body.
"Almost his whole right side was gone," Hebard said.
"They kept cutting and hoping.
Cutting and hoping."
Liam's health continued to deteriorate.
"I can't tell you what a feeling it is when he laid there and screamed because it hurt so bad," Hebard told NBC News.
Eventually, as Liam kept going downhill, he was transferred to another hospital on Jan. 21 so another team could take a look at the problem.
That night, Liam died.
The community of Pendleton is coming together to help the family with medical and funeral expenses and holding fundraises Friday.
There is also a GoFundMe fundraiser set up.
Hebard told People she hopes Liam's death will serve as a reminder to parents to be on the lookout for symptoms of necrotizing fasciitis, which include fever, chills, fatigue and vomiting.
"Even though this is my worst nightmare, I want to believe his death had a reason, it had a purpose," Hebard told People.
"Maybe it's to save other's lives because no one deserves to go through what we went through."