It's the second meteor to be filmed above North America in 24 hours! Fire ball lights up Alberta sky after magnitude 2.0 earthquake caused by a meteor in Michigan on Tuesday 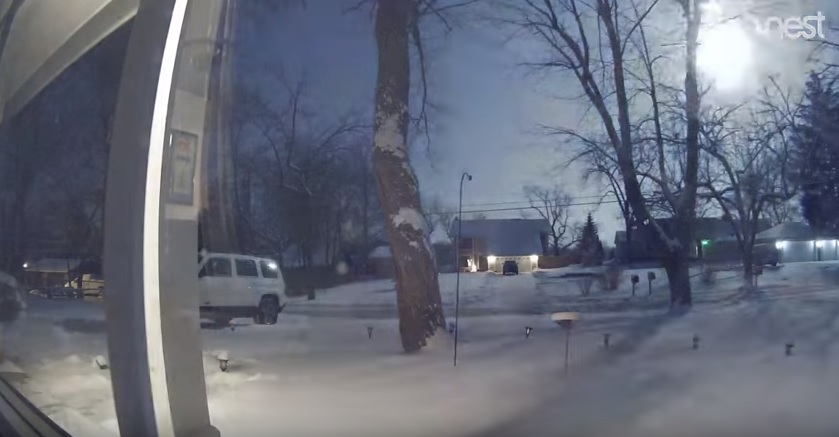 PHOTO AMS American Meteor Society
It's the second one to be filmed above North America in 24 hours...
Dozens of Albertans took to social media Wednesday evening to report seeing a large fireball in the sky over northern parts of the province.
Corbet Kratko was driving near the intersection of Highway 21 and Westpark Boulevard in Fort Saskatchewan when he said he saw the bright light descending through the sky.
The maintenance inspector with Alberta Transportation captured video of what appears to be a falling fireball on his vehicle's dashcam at approximately 5:21 p.m.
Witness Rogan Hennie told CBC News he was driving north near Lacombe, Alta., around the same time when he saw what he described as "a meteor" in the sky.
Fort McMurray resident Miguel Borges captured what he said was the flash of a meteor on his home surveillance cameras at 5:22 p.m.
Three people from Alberta and one from Saskatchewan filed reports of fireball sightings to the American Meteor Society between 5:17 p.m. and 5:30 p.m.
MST Wednesday. Chris Herd, an earth sciences professor and curator of the University of Alberta's meteorite collection, told CBC News that fireball sightings can be reported to the American Meteor Society or the Meteorite Impacts Advisory Committee.


The USGS claimed an explosion caused by a meteorite exploded with enough force to register as a magnitude-2.0 earthquake over New Haven Michigan on Tuesday.
The US Geological Survey confirmed that a meteorite had exploded in the sky near New Haven, Michigan, about 40 miles northeast of Detroit, on Tuesday night.
The USGS said the explosion caused enough force to register as a magnitude-2.0 earthquake.
Video posted on social media Tuesday night shows drivers witnessing a flying rock that emitted a bright light in the night sky before disintegrating.
Some videos showed it appearing to head straight toward some vehicles driving on a freeway before it disappeared.
Detroit NBC affiliate WDIV reported receiving "hundreds of calls" from viewers around 8:15 p.m. local time to report the phenomenon.
The meteor was seen across the region in places such as Ohio, Michigan and Ontario at about 8 p.m. local time and registered a 2.0 magnitude tremor about 4 miles (7 km) east of Saint Clair Shores in Eastern Michigan, the United States Geological Survey said on its website.
The National Weather Service (NWS) confirmed it was not a meteorological event but more likely a meteor.