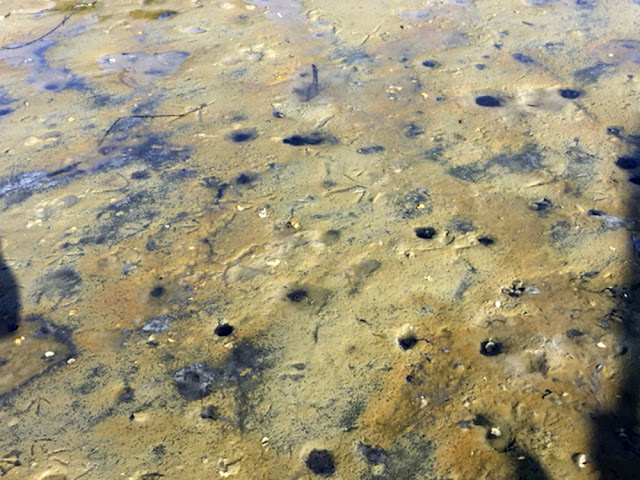 Photo pressherald.com
A rare late-season toxic algae bloom has closed most of the fertile shellfishing areas in Casco Bay, disrupting the region's wild-caught and farmed shellfish industry.
The state Department of Marine Resources expanded the area of the harvesting ban Tuesday so that it now stretches from Portland Harbor to the west side of Harpswell.
The closure was triggered when tests of shellfish flesh showed elevated levels of domoic acid, a naturally occurring toxin that can produce sickness and brain damage in humans.
The ban affects hundreds of acres of productive clam flats in Freeport and Brunswick and at least a dozen mussel and oyster farms in those towns and around Chebeague Island.
There were about 179 licensed clammers in Casco Bay in 2016, but 45 were in Harpswell, which has not been as heavily affected by the closures.
The number of full-time clammers is much lower than the total number of licensees.
Almost all people who are clamming at this time of year are full time, not recreational or seasonal, fishermen.
The domoic acid is being produced by a large phytoplankton bloom that includes species of Pseudo-nitzschia, the same kind of single-cell organism that closed large sections of the Down East coast to harvesting and forced shellfish recalls in the past two years.
This is the first recorded bloom of toxic Pseudo-nitzschia in Casco Bay.
Certain Pseudo-nitzschia species produce domoic acid, which can cause amnesic shellfish poisoning, resulting in nausea, diarrhea and vomiting, short-term memory loss and seizures.
The only recorded case of domoic acid poisoning occurred in Prince Edward Island in 1987, when three people died and more than 100 became ill after eating tainted blue mussels.
Having a bloom in this part of Maine so late in the season surprised state monitors, said Kohl Kanwit, director of the Marine Resources Department's public health bureau.
"We thought we were done.
We haven't seen Pseudo-nitzschia blooms resurge like this.
It is really late in the season," Kanwit said.
A volunteer on Chebeague Island first detected high concentrations of phytoplankton on Sunday, indicating an algae bloom.
A precautionary closure in the area was enacted Monday, after low levels of domoic acid were found in a shellfish sample taken from an aquaculture site in the middle of the bay.
It was expanded Tuesday after testing showed sharply elevated levels of the toxin in Freeport shellfish.
That sample had domoic acid levels of 17 parts per million, uncomfortably close to the 20 parts per million action level above which federal law mandates closures and recalls, Kanwit said.
"All through Casco Bay, there are visible detection levels," Kanwit said.
"We caught it in time.
It is one of those things, it can happen so fast."
The closure will remain in place until phytoplankton levels decline, Kanwit said.
In reaction to recent unpredictable Pseudo-nitzschia blooms, the state revised its monitoring protocol to allow snap closures at the first sign of toxin levels.
Aquaculture owners will still be able to harvest and sell the product as long as it is screened for toxins before it goes on the market, Kanwit said.
"There are always people who depend on this for their living.
We try our best to carve out areas that aren't being impacted, (but) sometimes it is unavoidable to have larger closures."
Eric Horne, who works at least 15 acres of oyster farms in Freeport, periodically deals with temporary closures because of storm runoff, but said a biotoxin closure is an unfamiliar challenge. "Any interruption to the flow of product is problematic for sure," Horne said. "This is a busy time for people in the shellfish industry."
Some wild harvesters don't have the luxury of specific testing and will have to wait until the state lifts its harvesting ban.
In 2015, clammers in Freeport, Yarmouth, Brunswick and Harpswell pulled in 822,287 pounds of softshell clams worth $2.1 million, roughly 9 percent of the statewide harvest value.
Last year, Maine's softshell clam harvest was worth $15.6 million, according to state records.
About a dozen Brunswick clammers were digging in Middle and Maquoit bays before the closure was put in place, said Dan Devereaux, the town's marine resources officer.
While it hurts to lose access to highly productive areas in the two bays, Brunswick clammers can still work flats on the New Meadows River on the east side of town, at least for the moment, Devereaux said.
"The closure could expand in another day, we don't know," he said.
"This is the stuff we are going to deal with now because the environment has changed."
Chad Coffin, a Freeport clammer, said this type of biotoxin is unfamiliar and the approximately one dozen clammers in town don't know what to expect.
"I don't have anything to compare it to," Coffin said.
Unlike the phytoplankton that causes regular red tide blooms in Maine during the spring and summer, cold water doesn't seem to bother Pseudo-nitzschia, he said.
The water in Freeport was 48 degrees Wednesday, Coffin said.
"Obviously it is concerning that the water is this cold and this stuff is apparently thriving or at least moving to the level of concern for public health," he said.