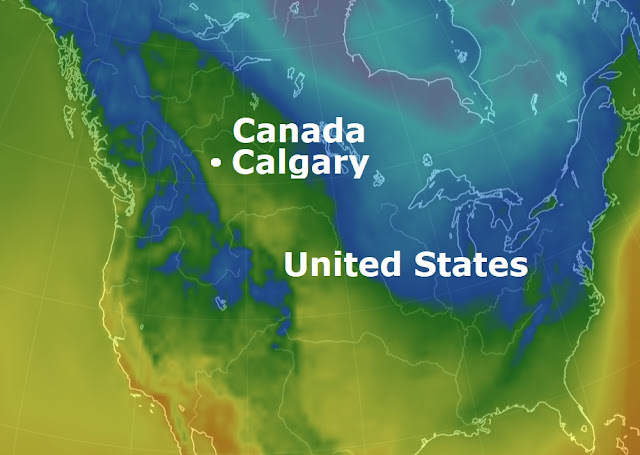 Earthwindmap
Many Albertans have been enjoying an unusually warm start to December, with some locations 15 degrees C above average.
Lethbridge and Grande Prairie both set new record highs Friday, with temperatures above 14C, around 60 deg F, while Calgary, Sundre and Claresholm were all notably close to new records.
On Saturday Calgary unofficially broke a 127-year record by reaching 15.1C- 60 deg F.
The old record of 14.4C was set in 1890, just nine years after Environment Canada starting tracking temperatures.
The month of December is typically the second coldest month in Calgary, with temperatures ranging between -1C and -13C.
According to the Environment Canada Climate Normals, December is the fifth snowiest month of the year for Calgary, with at least eight days of snow.
As of Saturday, the city of Calgary had not had any snow in December 2017 and it is unlikely that will change in the immediate forecast.
The heat is expected to continue for most of southern Alberta.
Overnight temperatures next week will actually be closer to the average daytime high, with some lows remaining above 0C.