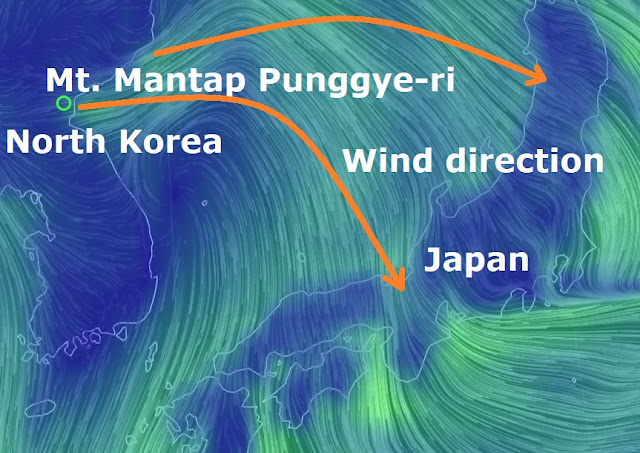 North Korea could be preparing another missile test after ‘brisk activity’ at Kim Jong-un’s nuclear research facility, which is feared to be now leaking dangerous amounts of nuclear fall-out which is being blown over parts of Japan.
According to military and weather experts, the deadly nuclear tunnel collapse in North Korea which killed 200 people last week is now leaking dangerous amounts of radiation with the threat of strengthening northwestern winds blowing the fall-out toward northern Japan, ironically over the crippled Fukushima nuclear plant.
According to AccuWeather research.
North Korean soldiers and their families are currently being treated for radiation exposure following a deadly tunnel collapse at a North Korean nuclear test site last month, according to multiple media reports.
As winds pick up out of the northwest over the next few days, it is possible that any radiation that leaks from the site could be carried and dispersed across the Sea of Japan [East Sea] and even to the Japanese islands."
The threat may include Hokkaido and far-northern Honshu, with the possibility of radiation reaching areas farther south this weekend, local time.
another North Korean nuclear test could result in radioactive materials being released into the atmosphere and reaching Japan’s main northern island of Hokkaido, South Korean officials warned.

According to The Asahi Shimbun, Pyongyang’s six nuclear tests at its Punggyeri site have weakened the mountain in the area to such an extent that radioactive substances could spew out from the next test.