Death-toll now 164 and rising with thousands more injured and missing as Iraq and Iran are bracing for another after mag 7.3 quake 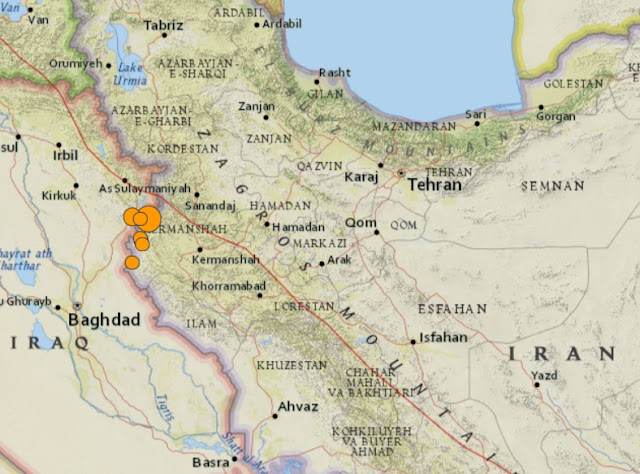 After-shocks are now a major worry as locals look for loved ones...Credit USGS.

At least 164 people were killed and more than 1,500 more were injured after a 7.3-magnitude earthquake struck near the Iran-Iraq border, the Iranian government said early Monday.
The state news agency, IRNA, said the official death toll was expected to rise.
The Iraqi Meteorological and Seismology Organization, meanwhile, warned that the country should brace for another possible quake in the coming hours.
The U.S. Geological Survey, or USGS, said the quake was recorded at 9:18 p.m. local time (1:18 p.m. ET) Sunday.
It measured the quake at a magnitude 7.3, while Iraq's state geologists said it was magnitude 7.5."
There are still people under the rubble," an Iranian governor, Mojtaba Nikkerdar, said on state TV, according to Reuters.
"We hope the number of dead and injured won't rise too much, but it will rise."
Stephen Hicks, a seismologist at the University of Southhampton in England, said that in a region where earthquakes are common, Sunday's quake appeared to be the largest in "a long time."
Like most of those other temblors, this one was shallow, said Don Blakeman, a geophysicist with the USGS's National Earthquake Information Center.
No large cities were near the epicenter, Blakeman said, but NBC News producers in the region said it was felt as far away as Tehran and Baghdad, which are about 460 miles and 170 miles away, respectively.
Still, Blakeman added, the region has many towns and villages.
"Without a doubt," he said, there will likely be serious damage.
At her home in Irbil, about 170 miles northwest of the epicenter, Lana Serwan said the temblor lasted for a minute.
"Everything was shaking," said Serwan, 35.
Another Irbil resident, Manar Ksebeh, 26, said he was in his 12th-floor apartment when he heard people running and shouting.
So he fled down his building's stairwell.
"I wanted to make sure I wasn't feeling dizzy," Ksebeh said.