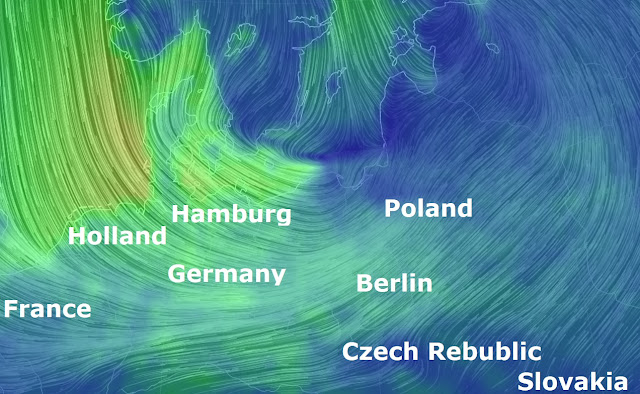 Earthwindmap
In Berlin, the German capital, one person was seriously injured when scaffolding from a construction site fell on him, a fire brigade spokesman said, adding that the roof of a residential building had been torn off and trees uprooted as a result of strong winds.
The fire brigade, which had declared a state of emergency, said that it had received 100 emergency phone calls between 4 am (0300 GMT) and 7 am and that all volunteer firefighters were called for duty.
Meanwhile, in Hamburg, the Elbe River burst its banks.
Rescue workers were blocking off nearby roads and attempting to secure a subterranean parking lot which may flood, a fire brigade spokesman said.
The northern German city's harbour had also flooded, and its famous fish market was closed off as a result of the storm.
He added that firefighters had been called out about 500 times to deal with emergency situations due to the storm.
A spokeswoman for the Deutsche Bahn rail company said that all trains have been cancelled in seven of Germany's 16 states.

Strong winds also caused damage in Slovakia, causing officials to warn families against visiting graves in the lead-up to All Saints' Day out of safety concerns.
Cemeteries in Bratislava were closed.

A driver died in his car in Poland after crashing into a branch that had fallen on the road near the northwestern city of Szczecin, firefighters said.
About 200,000 people were also grappling with power outages in western Poland.

In the Czech Republic, falling trees killed a woman near the central city of Trebic and an elderly man in Jicin northeast of Prague.
The strong winds halted traffic on dozens of railways and several roads across the Czech Republic. Some rivers in the north of the country reached the highest flood-alert levels.
"At present, hundreds of thousands of households are left without power," Sona Holingerova Hendrychova, spokeswoman for the state-run power producer CEZ, said in a statement.