By 2020 two thirds of all wild animals who once lived on the world will be dead! Colorado wants to shoot almost 100,000 healthy wild horses and burros 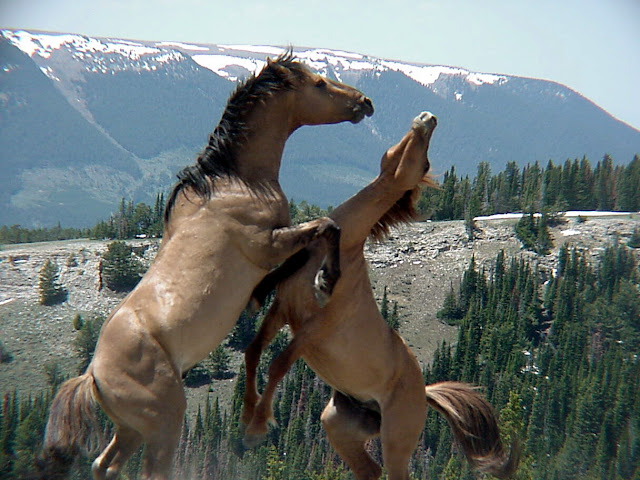 This morning the redoubtable Carol Rosin mailed me an article which in the current climate of devastation across our planet and the frightening realisation Earth appears to have crossed its own tipping point and is creaking under the strain along with the fact two-thirds of animals and insects will be extinct by 2020 will leave you staggered.
The post which Carol sent me is from NexusNewsfeed.com who have discovered that the National Wild Horse and Burro Advisory Board, in Colorado,  have recklessly voted to approve the shooting of almost 100,000 healthy wild horses and burros.
At a time when we should be finding ways to reverse the death and destruction of our species, it seems man's greed and ignorance is only speeding up the onslaught.

Just last week Keepers warn of 'bee-mageddon' after France authorises controversial insecticide.
The disturbing article came from The Telegraph which claimed:  French bee keepers are up in arms over the authorisation of an insecticide they warn could sound the death knell of their already decimated bee population.

Bee hives have been hit in Europe, North America and elsewhere by a mysterious phenomenon called "colony collapse disorder". The blight has been blamed on mites, a virus or fungus, pesticides, or a combination of factors.

With the honey harvest in France down to just 10,000 tons this year - three times less than in the 1990s - the country's national apiculture union, UNAF, slammed what it called the "scandalous" authorisation of sulfaoxaflor, which attacks the central nervous system of insects.

So where have all the bugs gone?
“This is part of the wholesale loss of small animals in recent decades.
“The public knows about bees and butterflies, but these are just the tips of the iceberg.
“Moths, hoverflies, wasps, beetles and many other groups are now sparse where once they were abundant.”

With animals dying by the thousands every week from extreme weather, drought, floods, heatwave etc, and our oceans seemingly dying at an unprecedented rate, surely the powers that be should be looking at ways to preserve our wildlife not kill it.

With our climate changed forever! World population to hit 8 billion and accelerating and the chance our planet could be ruined forever in just a couple of decades is not the time to stop the rape of our world?

In just three years’ time, the World will have lost two-thirds of all wild animals.
This amazing statistic from The Living Planet Index goes on: The number of wild animals living on Earth is set to fall by two-thirds by 2020, according to a new report, part of a mass extinction that is destroying the natural world upon which humanity depends.

The analysis, the most comprehensive to date, indicates that animal populations plummeted by 58% between 1970 and 2012, with losses on track to reach 67% by 2020. Researchers from WWF and the Zoological Society of London compiled the report from scientific data and found that the destruction of wild habitats, hunting and pollution were to blame.

In another report released by journal Science, Advances are claiming the world's primates face an "extinction crisis" with 60% of species now threatened with extinction, according to research.
A global study, involving more than 30 scientists, assessed the conservation status of more than 500 individual species. This also revealed that 75% of species have populations that are declining.
Add to this the unprecedented death of millions of tons of marine life around the world’s oceans and water ways all point to a crisis which has crossed the tipping point.

Just last year NOAA along with NASA claimed 2016 marked three consecutive years of record warmth for the globe with the first eight months of 2016 unprecedented warmth!
With 10 of the 11 warmest years ever recorded coming in the last 16 years, it is fair to claim climate change is climate changed it will never recover.
The Sun had not risen over its horizon for more than two months yet the North Pole was warmer than South of France, Italy, Greece Turkey and Syria this winter and not for the first time either the last couple of years!
The world is creaking under the stress; crops are failing all over the world due to extreme weather, and with 7.5 billion people we can’t possibly feed everyone, even though the West probably throw’s away enough food to feed the poorest.


2015 and 2016 were the two hottest years ever recorded; we should not be surprised therefore to find our oceans to be showing signs of stress as the delicately balanced eco system is also being stretched to its limit.
A deadly patch of warm water along the American West Coast called the ‘Pacific blob’, stretching all the way from California up to the Gulf of Alaska, Has killed thousands of California sea lions in 2015.
Many starved as they struggled to find food in an unusually warm eastern Pacific. Strange exotic tropical fish have been reported off the coast of Alaska.
In the winter of 2015 blue-footed diving seabirds called Cassin’s auklets, have been washing up dead by the thousands on beaches from San Francisco to Alaska, it is thought more than 250,000 died from lack of food.
An unprecedented die off  which began in 2011 along the West coast of North America when billions of sea urchins and sea stars died suddenly in what was 'one of the most unusual and dramatic die-offs marine biologists have ever recorded.'
The Culprit: Warm Water?
Bill Sydeman, a senior scientist at California's Farallon Institute, said he believes the most likely scenario is that the deaths are related to a massive blob of warm water that heated the North Pacific last year and contributed to California's drought and to 2016 being the hottest year on record.
That water was hotter and stayed warm longer than at any time since record-keeping began.
It stretched across the Gulf of Alaska, where a high-pressure system blocked storms, preventing the water from churning to the surface and mixing with air.
More warm water eventually moved inward along the coast as far south as California, altering how favourable the environment was for the zooplankton that many fish and birds, including Cassin's auklets, feed on.
Last year tens of thousands of common murres were the victims, an abundant North Pacific seabird, starved and washed ashore on beaches from California to Alaska, researchers have pinned the cause to unusually warm ocean temperatures that affected the tiny fish they eat.
A year after tens of thousands of the common murres died, John Piatt, a research wildlife biologist for the U.S. Geological Survey claims the deaths of the common murres is an indicator of the regions' health.
Elevated temperatures in seawater affected wildlife in a pair of major marine ecosystems along the West Coast and Canada, said
"If tens of thousands of them are dying, it's because there's no fish out there, anywhere, over a very large area," Piatt said.
It is thought 500,000 of the common murres, who look like thin penguins, died last year all though this could be just a conservative guess because only a fraction of the dead birds likely reached the shore.