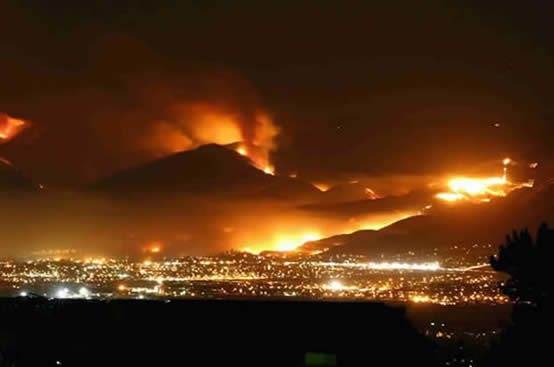 Photo interwork.sdsu.edu
Hundreds of firefighters struggled on Sunday to contain wildfires raging in northwestern Spain that have killed two people and disrupted road and rail travel, authorities said.
A total of 350 fire brigades backed by 200 soldiers were battling 17 major wildfires in the northwestern region of Galicia, the regional government of Galicia said in a statement.
Two people died after they became trapped by flames in their van near the town of Nigran as they tried to flee the area, Nigran mayor Juan Gonzalez told La Sexta television.
"The situation is worrying.
It was very sudden, it was crazy," he added.
Officials said the wildfires were being fuelled by strong winds, drought conditions and unusually high temperatures for this time of the year.
The head of the regional government of Galicia, Alberto Nunez Feijoo, said arsonists were to blame for many of the blazes.
"They are absolutely intentional fires, meditated, caused by people who know what they are doing," he told reporters.
Five wildfires were raging near the port city of Vigo, forcing the evacuation of a shopping mall and a PSA Peugeot Citroen factory on the outskirts of the city.
"We can see the flames.
The worst part is that we can't go out on the street, the air is unbreatheable," Vigo resident Severino Martinez, told Spanish public television TVE.
At least ten schools cancelled classes on Monday in Vigo because of the flames, local officials said.Spanish state-owned rail operator Renfe said it had cancelled a train linking Vigo to Barcelona because of the wildfires.Several roads in Galicia were closed because of the flames, local officials said.The national weather office is forecasting rain and cooler temperatures in Galicia beginning early on Monday which officials hope will help put out the flames.