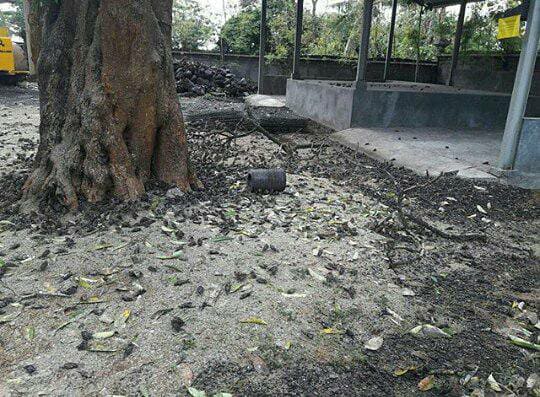 Photo strangesounds.org
Now thousands of birds are dead thought to have asphyxiated by gases and vapours of Agung volcano as the colossus prepares to blow
Thousands of birds are reported to have died on the island of Bali.
It is believed the birds have been overcome by the toxic gases being released from Mount Agung as it erupts, however, the death of the birds has not been confirmed.
Warnings that a volcano on the Indonesian tourist island of Bali will erupt have sparked an exodus of nearly 100,000 people that is likely to continue to swell, the country's disaster agency said Tuesday. Authorities have ordered the evacuation of villagers living within a high danger zone that in places extends 12 kilometres (7.5 miles) from Mount Agung's crater.
But people further away are also leaving, said National Disaster Mitigation Agency spokesman Sutopo Purwo Nugroho.
The region is being rattled daily by hundreds of tremors from the mountain, which volcanologists say indicates a high chance of an eruption.
Mount Agung last erupted in 1963, killing about 1,100 people and cooling the Earth by nearly O.5C.
Evacuees are taking shelter at more than 370 sites across the island that include temporary camps, sport centres, village halls and the houses of friends and relatives.
Villager Wayan Merta said he was among the first to evacuate last week because of his village, Selat, is just 6 kilometres (4 miles) from the summit.
"We have already sold our cattle because we thought it was better than leaving them there for nothing," he said.
"My feeling is the mountain will erupt," he said.
"But no one knows, we just pray."
Sutopo said it was "natural" that people outside the immediate danger zone are leaving.
More than 500,000 people evacuated when Mount Merapi in central Java erupted in 2010, more than double the population in the exclusion zone around that volcano, he said.