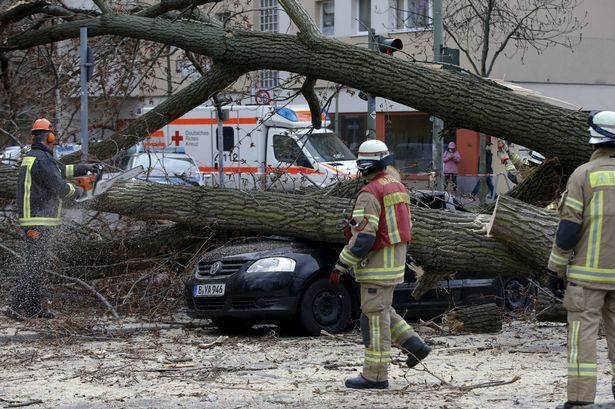 Photo sott.net
At least three people have been killed in a large windstorm that swept across Germany. Hurricane-force winds downed trees and toppled scaffolding, with officials warning residents to stay at home. Windstorm Sebastian wreaked havoc across northern and northwestern Germany on Wednesday, killing three people and causing power outages.
Wind gusts of up to 150 kilometres (93 miles) per hour were recorded in the northern Harz mountain range, according to the German weather service (DWD).
The North Sea saw gusts of up to 140 kilometres per hour, as residents in northern Germany battled driving downpours.
Three people have been killed as a result of the storm.
A man in a wheelchair died after falling into the Elbe River in the northern city of Hamburg, local firefighters said.
Witnesses saw the man fall into the water where he later drowned despite a rescue effort that included a boat, divers and a helicopter.
Also in Hamburg, a pedestrian died after being hit by scaffolding that fell from the seventh floor of a building, police said.
The man later succumbed to his injuries after being taken to a hospital.
And in the western German spa town of Brilon, a 53-year-old man was killed after he was crushed by a falling tree.
A 20-meter (65-foot) spruce tree fell on the man while he was working in the forest, local police said. Falling trees also caused train delays in the western state of North Rhine-Westphalia, while the wind caused significant damage to cars and buildings.
The DWD expects the storm to continue battering eastern Germany into the night, with parts of southern Germany expecting hurricane-force winds as well.
Several regions have warned residents to stay at home while emergency services attempt to clear the roads of fallen branches and repair power outages.