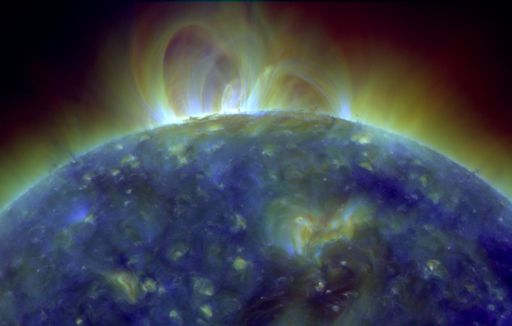 Has Monster sunspot AR2665 decayed or strengthened? The above picture suggests it's alive and kicking and could be coming back to hurt us?.
It's been on the far side of the Sun for the last two weeks and while it was away we got lucky! Monster sunspot AR2665 which faced Earth two weeks ago ejected a massive flare as big as the Carrington event, which could have knocked out satellites in space and electrical installations on Earth which could have knocked us back into the middle ages.
Well, it's still there and it's coming back...
The sunspot's towering magnetic canopy is now visible over the sun's eastern limb, shown here in an extreme ultraviolet photo from NASA's Solar Dynamics Observatory.
According to Spaceweather .com in early July, AR2665 crossed the Earthside of the sun, sparking moderately strong geomagnetic storms when it faced our planet.
The huge sunspot remained active during its farside transit as NASA spacecraft observed bright flares and multiple bright CMEs billowing away from its location.
Will AR2665 bring a new round of geomagnetic storms and auroras to Earth in early August?
It all depends on how much the sunspot has decayed in recent days.
Amateur astronomers with solar telescopes are encouraged to train their optics on the sun's eastern limb.
Dark cores should be appearing there soon.


Wikipedia The Carrington eventHome
at August 01, 2017