30,000 workers leave their work in panic as hundreds of garment workers fell ill in a heatwave many losing consciousness in Bangladesh 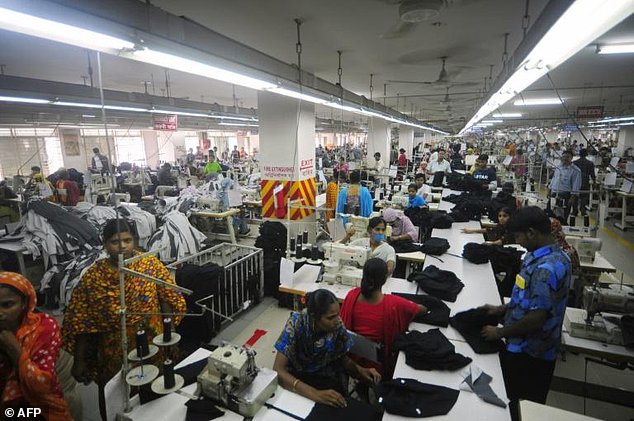 Photo thisismoney.co.uk
Panic broke out in more than a dozen factories in Bangladesh's capital as hundreds of garment workers fell ill in a heatwave, forcing the plants to close, police said Thursday.
Police said 18 factories, which export clothes to Western retailers, had been shut since Wednesday after chaotic scenes saw some 30,000 workers leave in the middle of their shifts.
"490 workers became sick (Thursday) and were taken to hospitals.
On Wednesday 365 workers fell sick," Shoeb Ahmed, head of Gazipur industrial police, told AFP. Ahmed said some workers lost consciousness in soaring temperatures, leading to others "panicking" and leaving the factories.
Mohabbat Ali, a general manager of Shareef General Hospital in Gazipur, said nearly 200 sick workers were treated at his clinic.
"They were attacked by a disease called hysteria conversion reaction.
We gave them salines and first aid.
They were released within an hour," he told AFP. Police and hospital officials said the labourers were malnourished, while a lack of rest owing to rising temperatures and acute power cuts had left them further weakened.
"Several of them passed out in the sweltering heat on the factory floors, which then affected other workers.
Malnutrition and lack of sleep also contributed to the situation," Ali said.
The temperature in Dhaka on Thursday rose to 36 degrees Celsius (97 degrees Fahrenheit), but taking humidity into account it would have felt like 51 degrees Celsius, according to Accuweather.com.
A mild heat wave is sweeping the country's central and southern region including Gazipur, according to the meteorological department.
"We felt nausea, vomiting and stomach pain after working for a few hours," a female worker told the New Age newspaper.
Bangladesh has more than 4,500 garment factories, many of which lack basic ventilation and air coolers, and which employ four million women workers at minimum monthly wages of $68.
The industry is notorious for poor workplace safety measures that have lead to a series of disasters in recent years, including the collapse in April 2013 of a nine-storey factory complex in which more than 1,130 people were killed.