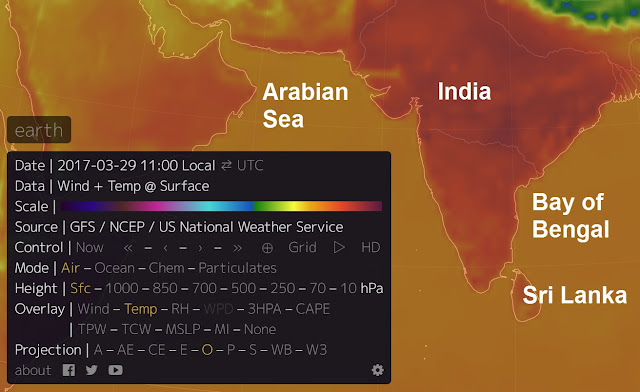 Map Earthwindmap click on image to enlarge
In a scary preview to how tortuous the 2017 summer threatens to be, the mercury breached the 43-degree mark in at least four towns and cities.
In most cities across Gujarat, the temperature touched 43 degrees.
Deesa in Banaskantha was record-breaking hot at 43.4 degrees.
The hottest March day before this was in 2011 at 43 degrees.
State capital Gandhinagar seared at 43.2 degrees while Ahmedabad shrivelled at 42.8 degrees which was a seven-year high after mercury climbed to 43 degrees on March 21, 2010.
City holds all time record high temperature of 43.9 degrees on March 30, 1908.
"The IMD Gujarat has issued a warning of severe heatwave conditions at isolated places of north Gujarat region, Saurashtra-Kutch which will continue on Tuesday as well.
Heatwave conditions too will continue to prevail at isolated places of south Gujarat region and remaining parts of north Gujarat region," said director (forecasting) of India Meteorological Department (IMD) Gujarat, Manorama Mohanty.

Last summer saw thousands die in India from the heat which caused roads and cars to melt.