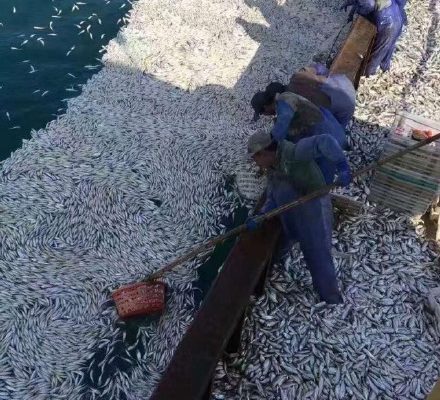 Fisherman said they caught nearly 10 tons of dead fish in a two hour period.
Translated from Chinese
Almost 10 tons of dead fish have suddenly surfaced in a 2 hour period on the afternoon of February 19th in Zhejiang PuTuo China
Apparently two fishing boats were in operation when suddenly thousands of glistening yellow croaker floated to the surface.
Swarms of them surfaced in the next 2 hours with the fishermen caught nearly 10 tons in total. According to the evening news reports in Zhoushan, Captain Zhang of one of the fishing boats claimed the boats where surrounded by a radius of nearly 100 meters of dead fish.
The other fishing boat captain of Xia Guoping said, it felt incredible, he said he had been sea fishing for more than 30 years, and had never encountered such a thing.
The fish are thought to have died from a toxic substance.