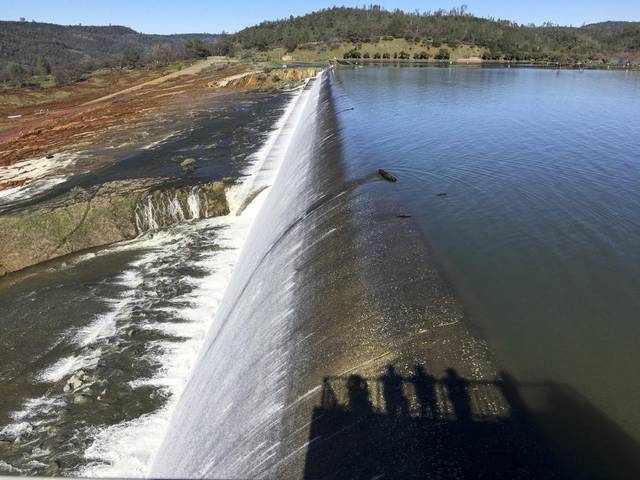 Only just over a month ago California was at the back-end of a miserable 5 year drought, just 40 odd days later empty reservoirs are overflowing emergency spillway’s leaving residents and water authorities very worried.
The Oroville Dam California’s second-largest reservoir has for the first time since it was completed in 1968, begun spewing water from its storm-swollen reservoir overtopping the emergency spillway Saturday, sending sheets of water down a forested hillside and adding to the murk and debris churning in the Feather River below. The emergency releases underscored the perilous situation confronting the operators of California’s second-largest reservoir for the rest of this extraordinarily rainy winter. 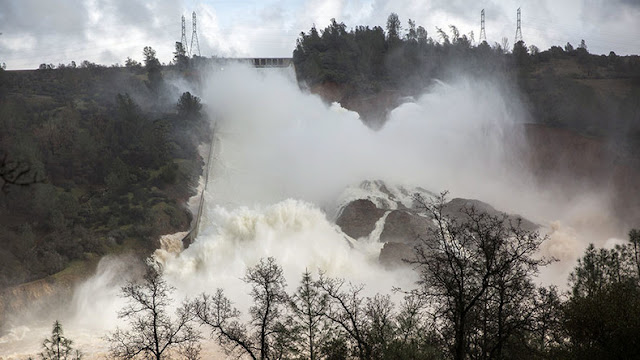 Photo RT.com
Unable to release enough water from the dam’s 3,000-foot main spillway, which split open Tuesday and continues to erode, the California Department of Water Resources announced that storm waters reached the top of the dam at around 8 a.m. Saturday and began flowing over the concrete lip of the adjacent emergency spillway onto a wooded ravine below reports the Sacramento Bee.
The flow began as a steady, smooth spill across the 1,700-foot-wide lip of the emergency structure, and was expected to peak at 6,000 to 12,000 cubic feet of water per second at around midnight Saturday. With dry weather in the near-term forecast for the Sierra and inflows to the reservoir slowing, the lake level should fall below the emergency spillway as of Monday night, said Doug Carlson, a DWR spokesman. 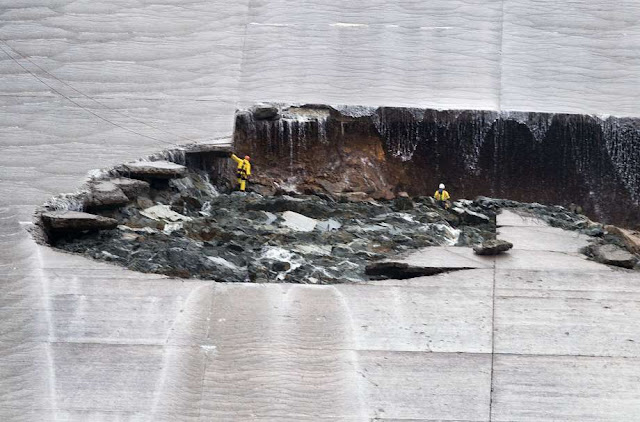 Photo Metabunk
But the crisis at Lake Oroville won’t abate any time soon. Northern California is on pace for its wettest winter ever, and Croyle said an estimated 2.8 million acre-feet of snow blankets the Sierra above the dam. Depending on how quickly that melts, it will put additional strain on Oroville Dam in the months to come.
“Our next 60 to 90 days will be critical, how we route this (snow) runoff through this reservoir,” Croyle said. “There’s a lot of snow up there.”
At various vista points in Oroville, a community of 15,000 just downstream of the dam, residents gathered under clear skies to gape in awe at the Feather River, so infused with mud and debris it resembled liquid clay as it tore through its channel.
Longtime resident Tom Oxford, 55, took in the view from a residential ridge on Mira Loma Drive, where the river surged beneath a railroad trestle. He took note that the trestle and levees on both sides were holding, with heavy moss rock that had been there for decades undisturbed by the fast-moving water.


Still, the sight was piercing. “We’ve never seen the river that brown before,” Oxford said, “and I’ve been here 50 years.”