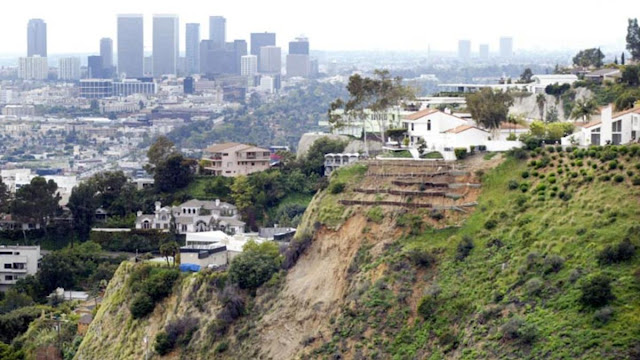 Five homes were evacuated and power was knocked out to hundreds of people after a hillside collapsed Monday evening in a Hollywood Hills neighborhood.
The mudslide occurred before 5:30 p.m. in the 8100 block of West Laurel View Drive.
According to the Los Angeles Fire Department, three homes were directly affected by the mudslide. The backyard of one of the homes slid down a hillside, crossed Laurel View Drive and went into the front yards of two other homes.
In the process, the mudslide damaged power lines and buried at least one vehicle, LAFD said.
There were no reported injuries.
Firefighters assisted three people who were trapped in their homes due to the mud to get out.
A total of five homes in the vicinity of the mudslide were evacuated as a precaution.
The mud did not appear to compromise the integrity of any of the homes, firefighters at the scene told KCAL9.
Several city agencies were called to inspect the structural integrity of the homes and the stability of the hillside.
As of 8:30 p.m., 709 Department of Water and Power customers were without power in the Hollywood Hills area.
Power was not expected to be restored until 3:30 a.m. Tuesday.