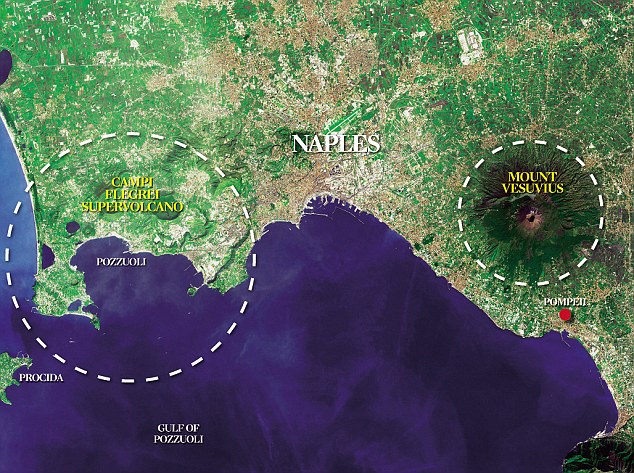 A slumbering Campi Flegrei volcano under the Italian city of Naples shows signs of "reawakening" and may be nearing a critical pressure point, according to a study published Tuesday.
Italian and French scientists have for the first time identified a threshold beyond which rising magma under the Earth's surface could trigger the release of fluids and gases at a 10-fold increased rate.
This would cause the injection of high-temperature steam into surrounding rocks, said lead author Giovanni Chiodini, a researcher at Italy's National Institute of Geophysics and Volcanology in Bologna.
"Hydrothermal rocks, if heated, can ultimately lose their mechanical resistance, causing an acceleration towards critical conditions," he told AFP by email.
It is not possible at this time to say when - or if - the volcano will erupt anew, he said.
If it did, however, "it would be very dangerous" for the half-million people living inside and near the caldera, he added, using the scientific name for the bowl-like depression created after a volcano blows its top.
Since 2005, Campi Flegrei has been undergoing what scientists call "uplift", causing Italian authorities to raise the alert level in 2012 from green to yellow, signalling the need for active scientific monitoring.
The pace of ground deformation and low-level seismic activity has recently increased.
Two other active volcanoes - Rabaul in Papua New Guinea, and Sierra Negra in the Galapagos - "both showed acceleration in ground deformation before eruption with a pattern similar to that observed at Campi Flegrei," Chiodini said.
The Campi Flegrei caldera was formed 39,000 years ago in a blast that threw hundreds of cubic kilometres of lava, rock and debris into the air.
It was the largest eruption in Europe in the past 200,000 years, according to scientists.
Campi Flegrei last erupted in 1538, though on a much smaller scale.
Nearby Mount Vesuvius, whose massive eruption just over 2,000 years buried several Roman settlements in the area, including Pompeii, is also classified as an active volcano.
The dense urban population at risk "highlights the urgency of obtaining a better understanding of Campi Flegrei's behaviour," Chiodini said.

Unfortunately when these two erupt the warnings will come too late for the majority of the people living in Naples and the surrounding areas. Only Jesus can save you...Stop Mocking and Scoffing and give your heart to Jesus NOW...Today IS The Day of Salvation.
Romans 10:9-13
9 that if you confess with your mouth Jesus as Lord, and believe in your heart that God raised Him from the dead, you will be saved; 10 for with the heart a person believes, resulting in righteousness, and with the mouth he confesses, resulting in salvation. 11 For the Scripture says, “Whoever believes in Him will not be disappointed.” 12 For there is no distinction between Jew and Greek; for the same Lord is Lord of all, abounding in riches for all who call on Him; 13 for “Whoever will call on the name of the Lord will be saved.”

It is certain, a changing event is making its way on this planet and no one shall escape.

Christ is Lord and these things must happen, and much worse, before the Kingdom comes. Pray for that day.

If your mental and spiritual house is in order, you're going to be just fine. No worries, people !!

How many of these super-volcanoes are there? How many more are there that we don't know about yet?

Have you considered the Alban hills volcano south of Rome?

Billy Meier excerpts of contact reports :
mentioned in several CRs , and as a sign to the coming world war

Billy:
I know from Quetzal that the volcanoes Vesuvius, Etna, and Stromboli should become very active in the coming time, and Vesuvius should erupt when the Third World War comes. Is that still valid?

Semjase:
177. The situation concerning the eruption of Vesuvius has changed, but the danger will exist furthermore.
178. The things of world events have already shifted time-wise, and certain prophecies will thereby change, be canceled, or come true at a later point in time.
179. The Etna volcano and Stromboli, however, will become very active, particularly starting in the late nineties, and will carry the risk of exploding in themselves.
180. Similarly, this applies to an Atlantic volcano of the Spanish Archipelagos.

CR 214
Billy:
You promote my understanding. But since we’re already talking about volcanism: How is it, actually, in Italy with Mount Vesuvius? To my knowledge, this is still active, and if it comes to an eruption, it will presumably come to a worse disaster than what was the case on the 24th of August, A.D. 79, when Pompeii was completely destroyed by the enormous eruption of Vesuvius and was buried. The hot, liquid magma under the soil of Vesuvius is hundreds of square kilometers in size and even extends beneath the city of Rome, as I know from you

Quetzal:
184. That is correct.
185. Under the volcano, at a depth of approximately eight kilometers, there is a huge lake of magma, which has a total area of 523 square kilometers, and from this, several vents flow out of the flanks and out of the crater of the mountain, and occasional masses of magma rise just beneath the crater’s surface.
186. And if it comes to an eruption of Vesuvius, and I mean a really tremendous eruption, there will be a catastrophe of enormous proportions.