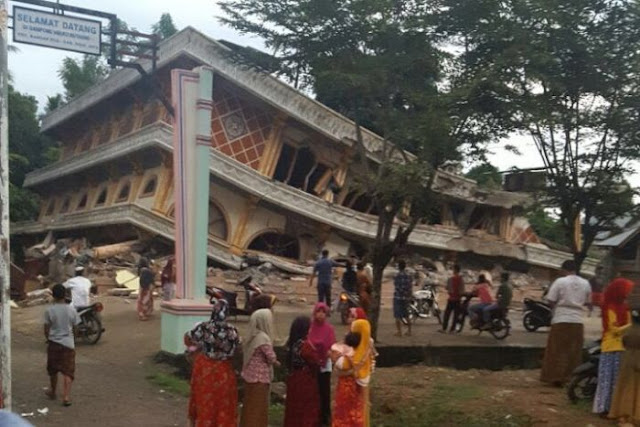 The number of homeless people has soared to nearly 50,000 after the deadly mag 6.5 struck Indonesia on Wednesday
The major quake struck off the north-east Coast of Sumatra Island killing more than a 100 people, dozens of buildings has collapsed and many people are feared trapped under rubble. In 2004, the same area was devastated by a tsunami that killed more than 160,000 people in Indonesia alone.
The Jakarta Post reported this morning that The National Disaster Management Agency (BNPB) announced Saturday that displaced Acehnese in Pidie Jaya and Bireun regencies were in dire need of clean water and family-sized tents following a strong earthquake in the province.

“After the earthquake the groundwater wells went dry; the water became shallow and black. Therefore clean water is the most needed now,” Sutopo Purwo Nugroho, BNPB’s spokesperson said in a press conference as quoted by Antara news agency.

Sutopo said that besides the dry wells, a power shortage has also prevented some water pumps from working properly. The government, he said, had sent water in trucks, built emergency water posts and continued repairing the electricity infrastructure.

The Public Works and Public Housing Ministry has sent four water trucks containing 6,000 liters of water, built 70 water posts and installed 80 portable toilets. Five water trucks, each carrying 4,000 liters of clean water, are on their way to the shelters.