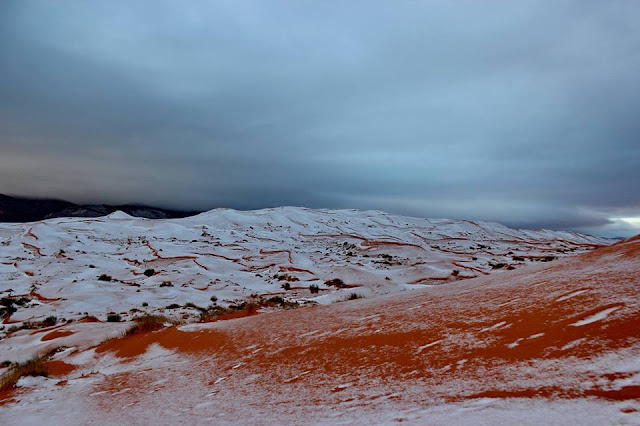 Incredible photos capture freak snowfall in the Sahara Desert, believed to be first time it has fallen on the unforgiving red dunes in almost 40 years.
The largest hot desert on the planet, spanning 3,600,000 sq. mi. and many North Africa countries, is not the first place many would associate with a snow during the festive period, with the rare occurrence leaving the man who captured the event stunned.
Amateur photographer Karim Bouchetata says he took the incredible pictures of snow covering the sand in the small Saharan desert town of Ain Sefra, Algeria, on December 19.
"Everyone was stunned to see snow falling in the desert; it is such a rare occurrence," Mr Bouchetata explained.
"It looked amazing as the snow settled on the sand and made a great set of photos.
The snow stayed for about a day and has now melted away."
Reports suggest it is only the second time in living memory snow has fallen in one of the most hostile environments on Earth.
The last time snow was reportedly seen in Ain Sefra, known as 'The Gateway to the Desert', where the Atla mountains meet the Sahara Desert, was on February 18, 1979, when the snow storm lasted just half an hour.
LiveScience notes that snow landing on the sand dunes is incredibly rare, adding it is a more common occurrence on Saharan mountain ranges.
"On February 18, 1979, low altitude areas of the Sahara desert recorded their first snowfall in living memory," the site reports.
"Snow fell in spots of Southern Algeria, where a half-hour snowstorm stopped traffic."
Temperatures in 'the Greatest Desert', which covers countries including Algeria, Chad, Libya, Mali and Morocco, have preciously surpassed 47 °C (117 °F).

Home
Posted by Gary Walton at 8:03 am