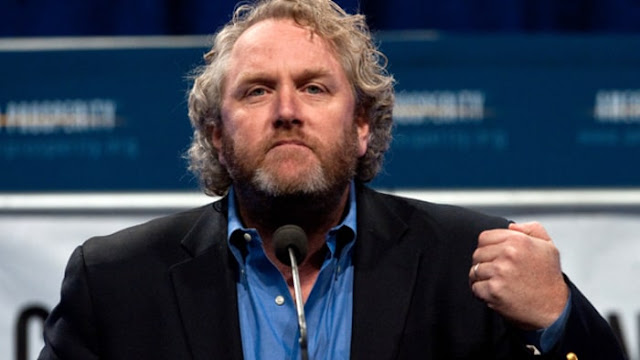 #Pizzagate today broke into the mainstream media with The Washington Times headline Andrew Breitbart tweet before death adds fuel to online speculation of D.C. sex-trafficking ring.
The paper reports Andrew Breitbart is making news even in death.
Social media speculation of a sex-trafficking ring in the nation’s capital has burned up social media sites for weeks. Complicating matters is Hillary Clinton campaign chairman John Podesta’s decision not to comment on anything WikiLeaks-related for months.

Explosive claims by Internet sleuths, which were prompted after reading stolen documents belonging to Mr. Podesta, have been derided as “viciously phony” by Fox News’ Howard Kurtz. A tweet by Mr. Breitbart shortly before his March 1, 2012, death is now being cited by online researchers as proof that they are onto something big. “How prog-guru John Podesta isn’t household name as world class underage sex slave op cover-upperer defending unspeakable dregs escapes me,” Mr. Breitbart wrote Feb. 4, 2011.

The conservative icon’s death at age 43 was attributed to “heart failure.”
Knowledge of the late conservative’s tweet sent Google searches for “Andrew Breitbart” skyrocketing Sunday night as news spread to members of Twitter, Reddit, GAB, Voat and other social media platforms. You can red the full Washington Times post here

Who was Andrew Breitbart?

Andrew Breitbart died on March the 1st 2012 out walking in his neighborhood Brentwood in Los Angeles, an autopsy by the Los Angeles County Coroner's Office showed that he had hypertrophic cardiomyopathy, with focal coronary atherosclerosis, and died of heart failure. Conspiracy theories arose about his death. The toxicology report showed, "No prescription or illicit drugs were detected. The blood alcohol was .04%. No significant trauma was present and foul play was not suspected. “Bill Whittle, a personal friend of Breitbart, had said that Breitbart had had a "serious heart attack" just months before his death but his coroner, the one responsible for declaring his cause of death, was also found dead from arsenic poisoning within hours of the release of Breitbart’s preliminary autopsy report, fuelling the speculation and the conspiracy theories concerning his death which remain today especially as he is now linked to the #pizzagate controversy.

What is #Pizzagate and the Podesta emails

#Pizzagate has gone viral, nuclear even, after Julian Assange; owner of WikiLeaks released hacked emails from John Podesta who is the former chairman of the 2016 Hillary Clinton presidential campaign. He previously served as chief of staff to President Bill Clinton and Counsellor to President Barack Obama. The leaked emails reveal strange coded messages which so called ‘conspiracy theorists’ claim refer to a pedophile ring where children are bought for sex by government leaders. It’s a story which has legs and just keeps on growing and to throw petrol onto the fire so to speak several Tweets have emerged from 5 years ago by right-wing journalist Andrew Breitbart in which Breitbart calls Podesta an underage sex slave amongst other colorful quotes.

Where is Julian Assange?

Whereabouts of whistle-blower Julian Assange Remain a Mystery
Julian Assange the WikiLeaks owner who recently released the Podesta emails, which may have uncovered a pedophilia ring in the American capitol which appears to include senior government leaders, has not been seen for 36 days. His internet connections were thought to have been unplugged during the American election by the Ecuadorian Embassy officials where he is staying. During the American election, Assange's WikiLeaks sight had a massive cyber-attack closing down the website.

Last weekend WikiLeaks urged people to stop requesting Assange ‘proof of life,’ the official Tweet asked; please stop asking us for "proof of life". We do not control Assange's physical environment or internet connection. The 45-year-old has been living within the confines of the Ecuadorian Embassy in London for more than four years. His political asylum follows fears he may be extradited to the US over WikiLeaks-related activities and it’s no secret the American government would like him killed.