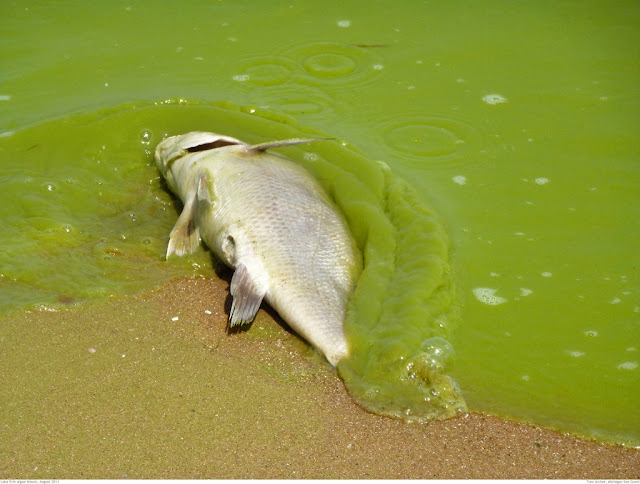 
A smelly, "guacamole-thick" muck is fouling a stretch of beaches promoted as Florida's "Treasure Coast," where lawmakers and residents blame the federal government, saying the algae crisis is fueled by freshwater flows controlled by Army officials to protect an erosion-prone dike.
The blue-green algae is the latest contaminant featured in yearslong arguments over water flowing from Lake Okeechobee, which is critical to South Florida's water supply and flood control systems. Florida Governor Rick Scott declared a state of emergency Thursday as blooms of toxic algae plagues beaches along the state's Atlantic coast.

"This is our Deep Water Horizon.
It's time the federal and state government understand how God-awful the problem is here," said Martin County Commissioner Doug Smith, referencing the 2010 oil spill that devastated wildlife along the Gulf of Mexico.
When the algae blooms die, they release toxins that cause rashes and could endanger wildlife.
The foul-smelling problem - which has closed beaches along the Treasure Coast - stems in part from stopgap measures put in place by the feds.
To preserve the ageing earthen dike surrounding Lake Okeechobee, the U.S. Army Corps of Engineers routinely releases water to the Caloosahatchee and St. Lucie Rivers.
After floods devastated the area around the lake in the wake of a massive 1928 hurricane that killed 2,500 people, the U.S. Army Corps of Engineers began regulating lake water levels to minimise the risk of a dike breach.
Now, local officials are citing the lake discharges as the cause of the spreading blooms - although the South Florida Water Management District said that septic tanks and storm water runoff can also play a role
This season's high temperatures and heavy rainfall have only exacerbated the problem.
The problem is not just in Florida but this year is effecting the whole country, below is a list of some of the problem area's...

Besides killing fish, red tide can cause respiratory irritation in humans and other mammals. Red tide, caused by Karenia brevis, crept its way to Lee County after festering off Sarasota County for several weeks."Some (fish) have been missing their eyes for a while, but you can smell the red tide and cell counts are elevated," said Rick Bartleson, a water quality scientist at the Sanibel-Captiva Conservation Foundation.

CDC Launches a New Website on Harmful Algal Blooms and a New Reporting System to Monitor Associated Illnesses
Have you ever been by a lake and noticed mats of green scum on its surface? Wondered if you should let your dog drink out of that foamy water in a lake? Found yourself coughing at a beach that was experiencing a “Red Tide”? You’re not alone. Many of us have had our plans affected by algal blooms – the overgrowth of algaeand cyanobacteria – on rivers, lakes, and oceans. Some blooms – harmful algalblooms or HABs -- produce toxins that can cause illness in animals and humans, contaminate our drinking water or seafood, or damage the local environment.
HABs are an emerging public health issue. In recent years, toxin-producing HABs have caused the shutdown of the water supply of a major US city, resulted in massive fish die offs, and sickened hundreds of people and animals with a variety of skin, breathing, stomach, and intestinal symptoms. Because animals are more likely to swim or drink from water that may contain a HAB, they are often the first affected when a HAB occurs. Therefore, it is very important to know what the possible health effects are before you swim, fish, or let your pets drink or play in suspicious-looking water.
To help partners and the general public learn more about HABs, CDC launched a new website. The website contains:

45,000 cattle have died this year due to drought in Tabasco, Mexico
60 tons of fish are dead in the Loire river after bad weather hits France

The next generation of oil is made...

It won't be ready just yet though